He is known as the biggest movie star in the world, yet not everyone in the UK knows him. Meet Shah Rukh Khan; Bollywood superstar who has appeared in over 80 Bollywood films and won 14 Filmfare Awards, India’s equivalent of the Oscars.

The Bollywood star boasts of 23 million followers on Twitter and 22 million likes on Facebook. Even over a decade ago, his movie Kuch Kuch Hota Hai (1998) was the highest-grossing film of the year, ahead of James Cameron’s Titanic at Cineworld Feltham, west-London, which testaments his popularity among south-Asians living here.

Besides owning a plush house on Park Lane in London, Khan has filmed numerous movies here. He was awarded an honorary doctorate degree in Arts and Culture by the University of Bedfordshire in 2009. In 2015, he was conferred with a 2nd UK honorary doctorate degree by the University of Edinburgh, given in recognition of his success as an actor with a global reach and his outstanding record of philanthropy, altruism and humanitarianism.

However, Khan’s stardom often sees him involved in controversies. His latest release RAEES was dragged into the political tensions that erupted last year between India and Pakistan, as the leading actress of the film, Mahira Khan, is Pakistani. Political parties had threatened to attack cinemas that would screen the flick. The actor had to go and meet the head of the political party MNS in Mumbai to negotiate a safe and smooth release. Apparently, the politician demanded that the actress shall not promote the film in India in any which way and apparently, Khan agreed.

Speaking about the controversy to BollyNewsUK, he said, “There was a time controversies bothered and disturbed me. I just couldn’t understand why some of the things were happening. Then l realised, that is what I do for a living. I make and release films. A Shah Rukh Khan film is an occasion for many people. I have realised that it’s more important that families across the globe have the option to watch my movies. I now know that it’s my responsibility to make the experience of watching the film for the viewer as comfortable as possible.”

Even in 2015, his film Dilwale faced bans in India after Khan commented about “intolerance” in India and was branded “anti-National” by many. “I have realised with my film “Dilwale” (2015) that I am putting viewers at discomfort. They want to see the film but there are situations due to controversies, which make the experience awkward. In the past, I have not understood why, but people have attacked my stand on certain things. I am clear that my stand now is for the viewer to be able to go and watch my film without fear.”

“After working in the industry for twenty-five years, I think its now my job that a film reaches everyone. I’m okay with going to meet people to explain to them what the film is about and hear their opinion to make it a smooth release. I have realised that I need to do this and well in-time, not two days before the film is out. I have started the process much earlier. If people have issues, I will address them,” said Khan.

Talking about the special song, a recreated version of Bollywood hit ‘Laila Main Laila’, he said “We wanted to capture the time period, the costumes and the feel. That is why we did not go for a popular Hindi film actress. Sunny Leone is marvellous. We did not want to take a famous actress for it as it’s not meant to be an item number. In the film, the song is one of the most crucial moments.” 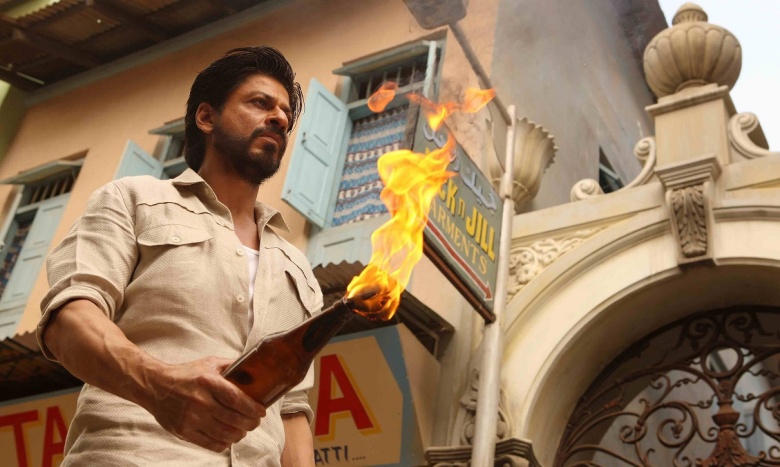 Khan, who owns Red Chillies Entertainment with wife Gauri Khan, has is eyes set to get into international distribution as well, after producing movies and ads in India.  “I am very clear that at Red Chillies Entertainment we want to start slowly distributing films ourselves. We have done that in India. To begin with, we have to partner with studios and ZEE is a good partner for the UK and USA for Raees. It’s easier now to get into overseas distribution. We have regular distributors and the business model has become easier. Its not for any other reason. All other distributors like Yash Raj Films, Eros International and UTV etc. are fantastic. But the main concern is that filmmaking has become more expensive. We want to market them a certain way and control how they released. We are making more than one film a year now and we know them better than studios. Dear Zindagi was only released in multiplex cinemas. We felt that this model will work for the film. If we had a distribution partner, they may have assumed that it’s a Shah Rukh Khan film and needs that kind of a release. But Dear Zindagi was not a Shah Rukh Khan film of a commercial calibre. The overseas release is very important, more so for me. My films sometimes do better overseas than domestically. That keeps us going. The overseas markets are perhaps bigger for me than for any other actor, ” said the actor.

SRK has often played negative characters throughout his career and those have often stayed the most memorable for his fans such as his portrayals in Baazigar, Darr and Don. Talking about revisiting a negative character he said, “I have a simple take on these negative characters; you can either like them or dislike them. As a character, I never try to justify them. If he is bad, he is bad. I don’t make any excuses for the character as an actor. Inherently, this character is a bit of a tragic hero. He makes some mistakes, which turn out more than what he had bargained for. He has a choice to get away with it and never be paying for his mistake, but he takes responsibility for his actions. This makes his somehow heroic, or the protagonist. I think, what people will take away from the film is that you need to take responsibility of your actions, whatever the outcome may be.”

“Priyanka Chopra, Deepika Padukone as well as others like Irrfan Khan, Om Puri and Anupam Kher have done a great job. They are opening doors for Indians in the western film industry. I am too old to take advantage of it. I’ll make films in India. But we should start a campaign in the UK to make me the next Indian James Bond. I’ll be a third generation Indian living in London, who joins the MI6,” says Khan laughing.