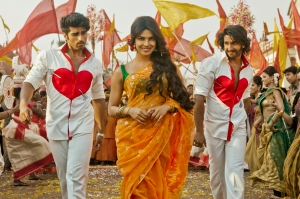 The trailer of Yash Raj Films’ forthcoming Gunday will be unveiled at the upcoming Dubai International Film Festival (DIFF) in the presence of the film’s stars Ranveer Singh, Arjun Kapoor and leading lady Priyanka Chopra along with director Ali Abbas Zafar.

The much awaited trailer will be premiered on Friday, 13th December at the Madinat Theatre and it promises to be an explosive and delightful treat for all fans and press alike.

Gunday will be the first Indian Film to have its trailer premier at the Dubai International Film Festival.

Based in Calcutta during its most unsettled times in the ‘70’s, the film deals with the inseparable life of Bikram and Bala, who grew from being small time, inconsequential coal thieves, to becoming the most powerful black marketing mafia-men. A story of two happy-go-lucky renegades who came to be known as – Gunday.

Directed by Ali Abbas Zafar and Produced by Aditya Chopra, Gunday is slated to release in UK cinemas on Valentines Day – 14th February 2014.