Humshakals promises nine times the fun. Filmed in London, it stars Saif Ali Khan, Ram Kapoor and Riteish Deshmukh all in triple roles – a never-before for Indian cinema, along with Tamannaah Bhatia, Bipasha Basu and Esha Gupta as the leading ladies.

It’s a wrap, for Humshakals. The shoot for the much-awaited comedy caper Humshakals, in Mauritius, has finally come to an end. Actor Riteish Deshmukh recently posted an image for his fans on the photo and video sharing platform, Instagram, to mark this special occasion. The image, a selfie, shows Riteish and Director Sajid Khan along with co-actor Saif Ali Khan posing for the camera.

Its a WRAP – SAJ & SAIF @Humshakals

The first look of the movie was released on the day of the India Pakistan T20 Match and has, since then, generated rave reviews for its unique ‘Nine times the fun’ positioning. Fans are eagerly waiting to see their favourite stars on-screen in triple roles.

Humshakals stars Saif Ali Khan, Ram Kapoor and Riteish Deshmukh in triple roles – a never-before for Indian cinema, along with Tamannaah Bhatia, Bipasha Basu and Esha Gupta as the leading ladies as is set in the United Kingdom. Directed by Sajid Khan, produced by Vashu Bhagnani’s Pooja Entertainment, and presented by Fox Star Studios, Humshakals is slated to release in UK cinemas on 20th June, 2014

After Yaariyan, T-Series in association with BVG films is all set to release Vikram Bhatt’s next sci-fi thriller, Creature 3D. The film starring Bipasha Basu will mark the debut of Imran Abbas and is slated to release on 27th June, 2014.

After Haunted, Vikram Bhatt wears the directors cap for another 3D film that will scare the audience with a creature created using VFX which will be a first of its kind in India.

Bhushan Kumar says, “Creature will be the first time we make a sci-fi film. This film will definitely give our audience something different and Vikram has shot it on par international standards. He has finished the shoot of the film and is now busy with post production for a 27th June release.”

Top Bollywood actress Bipasha Basu and Esha Gupta will be walking the ramp for a special collection at the most extravagant celebration of 100 years of Indian Cinema in aid of Pratham, India’s largest education NGO working to improve learning levels amongst underprivileged children.

The event is set to be a star-studded affair with a host of British Asian celebrities such as Gurinder Chadha and Preeya Kalidas who have also confirmed their attendance.

Guests will experience a unique collection which is inspired by the three main eras of fashion in Indian Cinema, spanning from 1913 to 2013. They will be taken on a journey of mesmeric panache and distinctive style from every iconic period in Bollywood including a black & white, colour and a pattern era.

The event will also include a ‘jugalbandi as performance art’ from top Indian contemporary artist Manav Gupta (listed amongst the top ten in India by the FT) and widely regarded as a maverick genius. For the first time in London, he will be translating a Sarod performance by Pt. Wajahat Khan LIVE on canvas in front of the audience in stroke play that has no parallel.

Starting his career as a costume designer for films, Bollywood gave Malhotra a creative platform to revolutionise the Indian fashion industry. He has dressed the crème de la crème of Indian celebrities and his reputation also extends beyond the subcontinent with International celebrities including Demi Moore, Kylie Minogue, Reese Witherspoon, Karolina Kurkova, Kate Moss and Naomi Campbell counting him as one of their favourite designers.

On lending his support to Pratham Malhotra said: “I am glad to be associated with Pratham, which helps educate underprivileged children in India, a cause which means a lot to me. September is the start of the Indian festive season and I’m excited to celebrate it in London with my 100 years of Indian Cinema fashion show. Bollywood and fashion are both very close to my heart, my journey as a costume designer to a couturier during the last 23 years has been an emotional experience and I’m happy to be sharing it on an International stage”.

Proceeds from ticket sales and an exclusive live auction will go towards the Pratham Institute which focuses on providing young people with the employability skills needed to address India’s growing need for skilled manpower. Between now and 2025, about 250 million young people are estimated to enter the Indian workforce, while only 5% of them aged 20-24 have obtained vocational skills through a formal training system.

Roy Martins, Board Director of Pratham UK said “Manish is an inspiring individual who has achieved success through sheer determination. We welcome his support and hope that his success will inspire the young minds that Pratham aim to ignite through the funds raised at this event”.

Bollywood actress Bipasha Basu performed to audiences in London as part of the Bollywood Showstoppers concert on Sunday, 7th April 2013 at The 02.

Bipasha performed to some of her biggest hits including Beedi, Namak, Billo, Marhabba and Bipasha Bipasha, some of London’s most popular songs.

Mixing business with pleasure, the actress who has a hectic schedule took time out to spend some quality time with her sister who accompanied her to London. After fulfilling her commitments in London, Bipasha Basu will  fly to Dubai where she completes shooting for a brand she endorses.

Says a source, “Bipasha Basu is one of the most popular actresses abroad. Thousands of her fans gathered in huge numbers to watch her performance at the Bollywood Showstoppers show and were shouting for an encore….Not the one to waste time, Bipasha will be immediately fly out from London to Dubai for her brand commitments”.

Watch her performance on Billo Rani and Namak exclusively here: 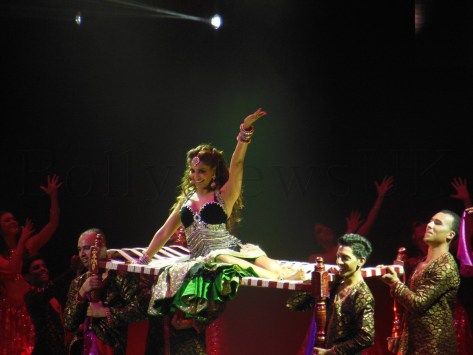 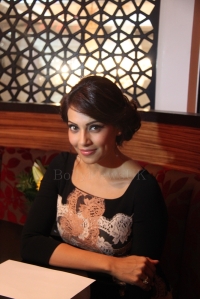 The Raaz 3 actress will be seen performing with Bolly Flex, a British dance troupe, at The 02 on 7th April 2013 in London. Basu spoke to Bollywood Reporter Sunny Malik ahead of the show about the UK, films and much more…

Welcome back to the UK. You were here in 2011 filming for your Hollywood film; Singularity. How was that experience for you?
It is always fascinating to shoot in the UK because the people are lovely. I can do things here that I love to do. I can walk around and be myself. It’s always nice to be here in the UK. I have had a few hectic months and I was looking forward to have a bit of a breather. The few days that I have been here, I have really enjoyed myself and I am feeling really relaxed. I have had really good food and walked around a lot. I am now looking forward to the show.

What do you like to do when you come to London?
I eat a lot (laughs). I love SNOG (frozen yogurt) and scones with clotted cream. I basically love high tea. I am always eating when I am in London. But I am simultaneously working out and I go for a daily run at Hyde Park. I don’t miss that.

You went straight to Selfridges from Heathrow when you landed for Bollywood Showstoppers a few days ago.
I did (laughs). I slept in the flight and caught up on a film. I actually wanted to see Argo for the longest time. So, I slept in the flight, ate a lot and went straight to Selfridges and then I bought a lot of things. It is really embarrassing (laughs).

How did Bollywood Showstoppers come about?
We have been trying to put together shows for the last five years. Besides the IIFA, I don’t think there has been a show with actors here. The last time I performed in a world tour was 2003. That was a time when I had just begun my career. I was supposed to be part of The Unforgettable show but because of a film I had to back out at the last minute. I have been planning to do shows for the longest time in the UK. When Naz (Bolly-Flex) came up with the idea, I knew that there will be mostly singers and performers involved and I will be the only Bollywood actress, but I was still very excited. I was still excited that I will be performing in the UK. I also love Atif Aslam. I would actually just want to sit and watch while he performs. 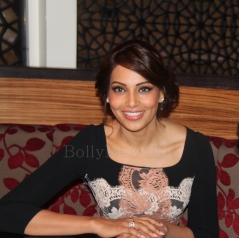 You once tweeted that you wish that Atif Aslam would sing just for you.
(Laughs) I say a lot of these things and that’s the fan side of me. But when I am working professionally, I don’t behave like that.

Would you say that performing on stage is harder than anything else you do?
I am not a trained dancer which is why it is harder for me. I never learnt dancing. I was a science student wanting to be a Doctor. I have learnt Bollywood dancing while I was doing my job. In my initial years when I started acting, I did not want to be part of films which required me to dance because I was so inhibited. From No Entry I started to enjoy Bollywood dance. I believe that it is not about the technique but more about the fun that you are having while doing it and that is all I do. When I am on stage, it is more about being confident, looking good and just enjoying what I am doing. I am not a Hrithik Roshan or a Madhuri Dixit or a Aishwariya Rai Bachchan, who are fabulous dancers. I have to put in a lot of effort. I am a girl who loves working out (laughs). I try to make my acts on stage look strong and energetic and not very delicate because that does not suite me. There is a lot of thought process involved like what people like to see and there are popular songs that you have to think through. It is tough.

What can we expect from your performance?
It is going to be a mix of all my hit songs. You will see me in a western style and also in an Indian one.

Your last UK release was Raaz 3 as Aatma did not get a UK release. Both were different films and we are not seeing you in big comedy films anymore. Is that a conscious decision?
I am done with all those films. I have been in the industry for twelve years now. I have done a bit of everything. I am very clear in my head about what I want to do. Acting is not about money anymore, thank God. I am well settled and blessed. I can look after myself well. It has to be things that excite me to go on a set and certain films don’t excite me. I have done a lot of films; some are crap, some are terrible, some are great and some are fun. I am not that actress anymore who works from nine to nine. I am somebody who is much more involved in the writing of the film, character development, casting, even post production and then promoting the film to release.  I believe that when I take on a film, I want to be excited. I know that Aatma is a very credible film and will always remain so. It’s one of my strongest performances. I am very proud of it. I did films like Phir Hera Pheri but I don’t have anything to do in them.

Tickets for Bollywood Showstoppers are available at : http://www.bollywoodshowstoppers.com

Bipasha Basu  visited the Star show ‘Arjun’ to promote her next film Aatma. The Bollywood diva is also scheduled to perform in the UK with BollyFlex in early April.

Check out these photos: 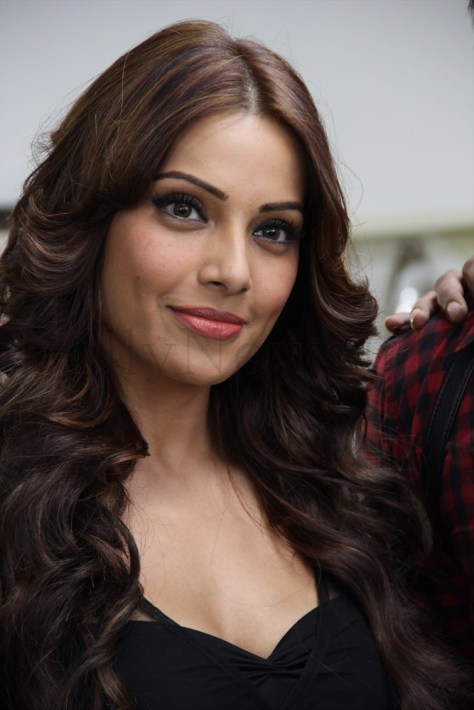 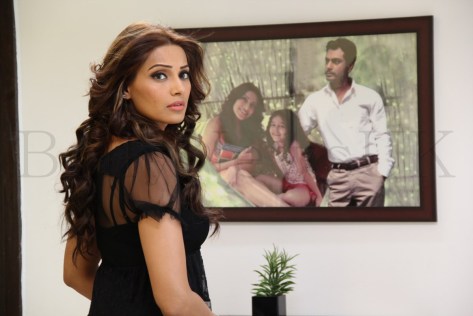