The super star Salman Khan is set to ‘Kick’start this Eid with this action rom-com directed and produced by Sajid Nadiadwala. 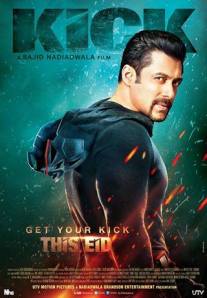 The story goes as Himanshu (Randeep Hooda), a police officer, is hounded by the only blot on his career, Devil (Salman Khan).

Shaina (Jacqueline Fernandez) who does not know what to do about Devil’s Kick. Devil who thinks life without a kick, is nothing.

And Character Name (Nawazuddin Siddiqui) who wants to know who this Devil is, who deems to be more evil than him.

What happens next? What is the mystery of Devil? Who is he?

Releasing this Eid, Kick promises to be a complete wholesome entertainer with an engaging plot and Superstar Salman Khan at his best – as an action hero and a passionate, naughty lover.

Watch the first song from the film here: