One of Bollywood’s finest actresses, Vidya Balan will turn super sleuth in her forthcoming film: Bobby Jasoos, which releases on 4th July 2014 by Reliance Entertainment.

The gripping film sets a new benchmark for the thriller genre in Indian cinema and examines in a clever, witty and fresh way the dynamics of the gender struggle between women and men. The film celebrates the aspiration of ‘Bobby’ (Vidya Balan – The Dirty Picture, Parineeta), who wants to become the number one detective in the old city area of Hyderabad. What ensues is a classic thriller caper that serves up a tantalising mix of twists and turns, as the vivacious and engaging ‘Bobby’ solves a series of mind-boggling crime cases.

Bobby Jasoos stars the talented and multi-award winning actress Vidya Balan, who once again shines in the title role of this quirky and edgy thriller. Famed for playing strong female protagonists and for breaking the stereotype of a Hindi film heroine, Vidya portrays the lady detective ‘Bobby’ with dedication and suitable aplomb, marking a new direction in the career of this ever-versatile actress. 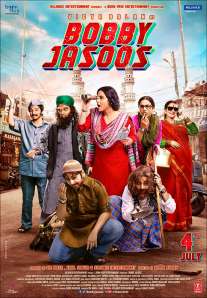 Vidya Balan has wowed audiences since her big screen debut in the 2003 independent Bengali drama film Bhalo Theko, and has gone on to win an impressive 12 awards for her acting work and stellar contribution to the Indian film industry. She is the recipient of a National Film Award, five Filmfare awards and five Screen awards, as well as being awarded the prestigious Padma Shri by the Government of India in 2014.

She achieved global critical acclaim for her role in the ground-breaking film The Dirty Picture, in which she portrayed Silk Smitha, a South Indian actress noted for her exotic roles. Other notable roles include the musical drama Parineeta and the successful comedy film Lage Raho Munna Bhai. In 2013 Vidya was one of the official ambassadors for the Indian film industry at the Cannes Film Festival.

Bobby Jasoos is directed by Samar Shaikh, whose impressive cache of work includes being the assistant director on the worldwide hit franchise Dhoom. The film is co-produced by Bollywood actress Dia Mirza and Sahil Sangha under their production banner Born Free Entertainment and Reliance Entertainment.