In what is billed to be one of the most lovable films to hit Indian cinema screens this summer, the must-see romantic comedy Humpty Sharma Ki Dulhania weaves the classic ‘boy-meets-girl’ tale into a unique and quirky youth drama for the modern generation. The film is produced by renowned filmmaker Karan Johar’s production banner Dharma Productions and released in UK cinemas by Reliance Entertainment on 11th July 2014.

Bollywood hearthrob Varun Dhawan (Student Of The Year, Main Tera Hero) plays hopeless romantic ‘Humpty Sharma’, an eternally optimistic young man, who is amiably searching for his ‘Dulhania’ (bride). Enter strong-willed, no nonsense Delhi girl ‘Kavya Pratap Singh’ (Alia Bhatt – Student Of The Year, Highway, 2 States). What ensues is a sweet and amusing story, as the ever simple loser in love ‘Humpty’ deploys every means at his disposal to convince ‘Kavya’ that he is her soul mate. 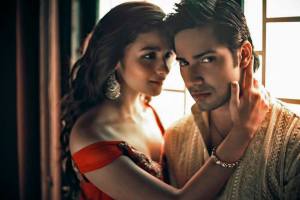 Humpty Sharma Ki Dulhania stars Bollywood’s new-kid-on-the-block Varun Dhawan, who made his successful debut with the breakthrough Dharma Productions film Student Of The Year along.Famed for playing the sentimentalist and also renowned for doing his own stunts, Varun is set yet again to show why he is one of Indian cinema’s rising stars in Humpty Sharma Ki Dulhania. With charisma and acting talent in abundance, the young actor has already won awards, including the Star Gold and Lions Gold awards, and has been nominated for several ‘newcomer’ accolades.

Bollywood sweetheart, Alia Bhatt, who also made her big-screen debut in the Karan Johar production Student of the Year and received widespread critical acclaim for her role in Highway and 2 States, convincingly plays the main female protagonist, sealing her position as one of Bollywood’s most sought after leading ladies.

Humpty Sharma Ki Dulhania promises to be a quirky, sentimental and hilarious tale about the pleasures and pitfalls of young love.