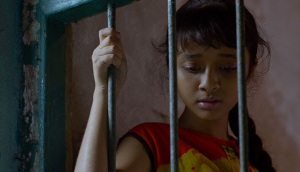 Hard-hitting feature Sold will have its red carpet European Premiere at the opening of the Fifth annual London Indian Film Festival (10 – 17 July). Based on the bestselling novel Sold by Patricia McCormick, the film is a powerful drama based on real life events, and tells of a young Nepali girl’s struggle for survival after being sold into prostitution in Kolkata, and an American photographer (Gillian Anderson), who, against the odds, attempts to rescue her and other young women. The X Files and The Fall star Gillian Anderson is expected to participate in a Q&A in London at the film’s opening night amongst other talent.

Director Jeffrey D. Brown, Executive Producer Emma Thompson and Producer Jane Charles have worked tirelessly to bring this film to the screen researching every aspect of the story in depth with charities which deal directly with child trafficking in India including: Apne Aap, New Light, Sanlaap, Prajwala and in Nepal: Maiti Nepal, Shakti Samhua and Childreach International. Emma Thompson, president of the The Helen Bamber Foundation, works with survivors in London which is why she is informed on this issue and cares deeply about it.

Now Europe’s largest platform for Asian cinema, the London Indian Film Festival returns to the Capital, celebrating Independent cinema and bringing to UK audiences a rare selection of cutting-edge films from some of India’s hottest independent talents. Going way beyond Bollywood, the festival presents a kaleidoscope of new films that challenge, shock, generate debate and present a more realistic view of India and the subcontinent today, in all its diversity.

The festival will open in the West End at the historic Cineworld Haymarket, and continue at BFI Southbank, ICA and Cineworld Cinemas around London. The festival is grant funded by the BFI Film Festival Fund.

About the screening, Executive Producer Emma Thompson comments: “It is wonderful to have our film premiered at London Indian Film Festival, to raise awareness of child-trafficking, which is an issue close to my heart and is shockingly on the increase world-wide. We hope that this film will make people think and highlight the support for key charities such as The Helen Bamber Foundation and others working in this difficult area in India, Nepal and elsewhere”

About the film, Actor Gillian Anderson states: “Working on this sensitively told film and with young women who have themselves experienced the un-believable trauma of abduction and trafficking has opened my eyes to the horrors these young people face on a daily basis as well as the often life threatening danger those working at the charities put themselves in to free these innocent victims from modern day slavery”

Cary Rajinder Sawhney, Festival Director comments: “We are delighted that the festival is growing from strength to strength and that we have Sold for our opening night. It is a film which is remarkable on many fronts not least its riveting script and direction, but also gripping performances by Indian and US actors especially lead actor Niyar Saikia who brings so much power and heartfelt pathos to the role as the resilient young girl protagonist Lakshmi”