Alia Bhatt and Arjun Kapoor were in London recently to promote their upcoming movie, 2 States.

Bollywood Reporter Sunny Malik caught up with the duo and spoke about the film, an adaptation of the best-selling novel of the same name by Chetan Bhagat.

This is the first time you are promoting a film in the UK. How is it going?
Arjun: I am just meeting people one by one in the room here just like I do when I promote my films in India. It doesn’t feel like I am in London and I am going to take it up with my distributors as to why they didn’t make the interviews happen out in the open (smiles). But it feels really nice to come here as an actor for the first time. I have travelled to London many times in the past as an assistant director or pleasure as I have many friends here.

You both are meeting fans at Cineworld Feltham later. Did you tell Arjun of what he should expect? 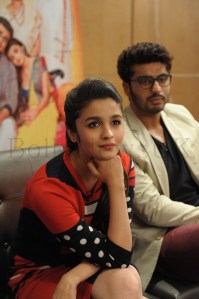 Alia: I have been there once before my first film, Student Of The Year, released and nobody really knew us. But the fans were very warm people (laughs).

Arjun, you don’t seem impressed…
Arjun: It’s not that I am not impressed. I just find it very surreal that people will take out the time to come and meet me. I have seen it happen with stars like Salman Khan. I have seen him not able to take one step forward because of huge crowds who were there to see him. That is true stardom and I find it surreal when something like that happens to me.

Arjun, the co-producer of the film, Karan Johar, said that Sajid Nadiawala was taken aback by his suggestion to cast you in the film. How did everything fall into place?
Arjun: Sajid Nadiwala was always passionate about making 2 States into a movie. A lot of A-list actors and directors showed interest but nothing ever materialised. When my debut film, Ishaqzaade, released Karan Johar loved it and so did the director of 2 States, Abhishek Varman. I was called into the Dharma Productions office and I read the script. I loved it and I was on board from that day. Sajid Nadiwala has seen me growing up and hanging around at Salman Khan’s house. We have taken holidays together and know each other well. I think, he was just taken aback that “Oh the time has come when Arjun is going to act in a film produced by Nadiawala Grandson.” More than anything, it was an overwhelming feeling for him that this boy he has seen growing up, will be starring in his production. I am really happy that both producers, Karan Johar and Sajid Nadiwala, showed faith in me.

Alia, were you always the first choice for the film?
Alia: I am sure I wasn’t (laughs). I was still filming for Student Of The Year and I was very young at that time. I was called in for a look test for 2 States and I really thank Abhishek Varman, the director, for having that faith in me. When I read the book, I never thought that I will be playing this character on-screen eventually. It’s his faith in me as an artist and performer that got me onto this film.

Alia, were you bothered that people were criticising Karan Johar’s decision to cast you in the film? Many fans felt that you don’t look Tamilian…
Alia: No, it didn’t bother me at all. People can be sceptical or think it’s great. At the end of the day, when I am in front of the camera, I am not Alia Bhatt, I am Ananya. I try as much as possible to be her and stay true to her. Also, being a fan of the original book, I never took it granted even for a minute that this role came to me. It was up to me to deliver my best and now when the film releases, it is up to the audience whether they accept me or not. 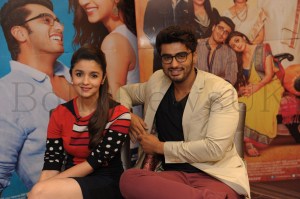 Arjun, fans usually get disappointed when their favourite book is turned into a movie. How do you think this film will come across to the die-hard fans of 2 States and to people who have not read the book?
Arjun: Our director, Abhishek Varman knows that there is a huge fan following of the book and he kept the script very close to the source. He himself loved the book a lot. There is an old saying, ‘If it aint broke, don’t fix it’. He pretty much followed the flow that Chetan Bahagat wrote. Also for people who have not read the book, like me, you have to find a correlation so that people relate to these characters. He has balanced that really well and intelligently. He made it for a universal audience. 2 States is eventually a love story about two families. Two people can be in love but in our culture it is very important to be accepted by your families. The film is very relatable for someone who has not read the book and also for someone who has.

Alia, you get really irritated when people ask you about the kissing scenes shown in the trailer. Why is it such a big deal if you are kissing?
Alia: The minute you are candid and honest about how it doesn’t matter that suddenly becomes the centre of attention. They say it’s refreshing for you to be honest and not say ‘I did it because it was a part of the script’. But now every newspaper is only writing about the kiss. It is annoying because 2 States is not just about the kiss. It’s a family film and not about these two people constantly making out. We have to show the kiss in the film because it’s important in the book. Also, when people live together they kiss. How prudish can you be if you are living together but you don’t kiss?
Arjun: When two people are in love, they kiss. It’s really normal. The fact that we treat it so normally, is absurd for people.
Alia: There were rumours about us dating and journalists want to confirm the rumour by writing that they enjoy kissing each other which means they are a couple. I mean, if we were dating why would we say something like that?
Arjun: If we had said, we hated kissing each other, even that would be the headline. Eventually, when you use the word kiss, it will make it to the headline. It doesn’t matter if I have given 17 other answers as the kiss question will be the focus of the interview. 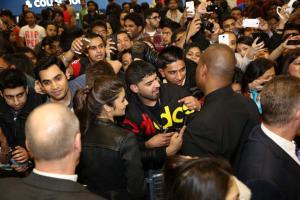 Don’t you both feel that when the press is focused so much about the kiss and the trailer shows intimate scenes, it can put off family audiences, especially here in the UK?
Alia: The families are on the poster and the film is not just about two people. The film is whole different world altogether and not about just about intimacy.
Arjun: Any sensible viewer, who watches the trailer, will know that the film is not just about kissing for three hours. It’s an aspect that comes and goes in the film. Trust me, all that you see in the film, is already out there in the trailer. I don’t think our audiences are so naive to believe the headlines that are being written about the film being all about kissing scenes. I trust our audience.

How do you feel this film will do at the UK Box Office now that films with newcomers are releasing more frequently here and some do well like ‘Highway’?
Alia: Highway was trending in the UK on Twitter on the day of release. I was very happy. I hope 2 States does well and I hope that book fans add to our audience.
Arjun: The UK has always been a very family oriented audience. This film truly represents that audience base. It is made for that audience. For me, Gunday was my big international release. I think, there is hope now that people are coming to cinemas to watch new faces now. With films like Highway, Hasee Toh Phasee or Gunday doing well here. It is a very star driven industry anyways and you need to keep working to change the audiences’ mind set to come and watch it. I am very hopeful that people will come out of the suburbs of England to the cinemas to watch the film.