Kareena Kapoor is Bollywood’s most sought after actress. Whether its films or brand endorsements, the 30-year-old actress is in demand everywhere. She is also the only actress who can flaunt about having films with all the Khans, due to release over the next six months. She has been given titles for the “sexiest” and “number one” actress but takes them lightly as she prefers her work to speak for herself. I caught up with the actress in London to talk about her forthcoming release; Bodyguard, while she was here on a private holiday with beau Saif Ali Khan.

What is Bodyguard about?
Everyone knows that it’s this big Salman Khan movie and it has got action and comedy. But the best part of this movie is that it’s basically a love story. That is the emotional and strong part of the movie. That is where my character comes in.

What is Salman Khan’s character in the film?
He is the bodyguard to this girl, played by me who goes to college. She tricks him to fall in love with him to get rid of him, as he is constantly annoying her. Through that process, she actually falls in love with him. Then the saga starts and it’s very deadly and entertaining. 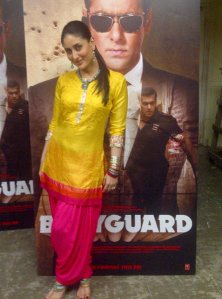 Why an emotional love story with Salman when the recent films you did together did not work at the Box Office?
Salman has not done a love story in a while. He has either been doing action or comedy.
This film has got everything in it to make it a success.

Why did you decide to be part of this film?
I think, because of the role. In a Salman Khan film, this is actually the only film where the girl is the backbone of the movie.

You have a British actor in Bodyguard, Hazel Keech who plays your friend. How was your experience working with her?
It was great working with Hazel. She is a lovely girl and I know that she is from London. She has a special role in the movie and I hope people like her as she has acted really well.

How was it working with Salman? He is said to be always late on the sets.
Well, actually I am quite a late person myself. I am not a very morning person. So it has actually worked out perfect for me because Salman is never on the set before eleven and I don’t wake up before ten. So, that’s great (laughs). It suited me fine because I hate early mornings.

You have a very nice desi look in the film. Did you decide on your look in the film or did you leave that to your designer?
I think, it was both Manish Malhotra and me. We sat down and decided on the look. Obviously, the desi look that you see in the film works for me very well. Everyone likes that look more. I think my fans like to see me in that sort of getup. The look has colour and is glamorous but is also traditional and nice.

Is Divya (Bodyguard) similar to Geet (Jab We Met)?
Not really. Of course there is Punjabi and stuff like that but there is nothing really similar. When you see it, you will know that she is fun and bubbly but that’s me. Geet was completely different. Geet was iconic in its own way and Divya is quite special in its own way.

What is your favourite song from the film
I love Teri Meri Prem Kahani. Everybody is listening to it and they love it too.
Have you seen the original Bodyguard?
I have seen the Mallayalam film.

Does the film have a surprise element or is it different from the original one?
It’s simple, nice and there is no gimmick to it. Apart from the action, it’s quite pure.

As Bodyguard is releasing worldwide on Eid, it stars you and Salman. Do you think there are higher expectations from the film?
Of course, there is this Salman and Eid connection and it’s his first release after Dabangg. But I am quite sure that people won’t be let down. It has got everything to make the movie a huge success.

Which director would you like to work with in a solo Heroine film?
I would love to work with Imtiaz Ali again and with Raj Kumar Hirani again.

If you could remake one Hindi film with Saif which one would it be?
With Saif? Oh God (laughs). Actually, I should be asking my fans this. They should give me ideas on which film they would like to see me with Saif in a remake.

Produced by Atul Agnihotri, Alvira Agnihotri and Reliance Entertainment, Bodyguard is releasing worldwide and in the UK on the 31st August 2011.