In a unique, first-of-its-kind move, the trailer of Krishika Lulla and Aanand L Rai’s forthcoming comedy of errors, Happy Bhag Jayegi was launched on the sets of the most popular sitcom of Indian television – The Kapil Sharma Show!

The cast and crew of Happy Bhag Jayegi, including Abhay Deol, Diana Penty, Ali Fazal, Momal Sheikh and Piyush Mishra were present for the trailer launch along with producers Krishika Lulla and Aanand L Rai and director Mudassar Aziz.

The show’s popular characters Dr Mashoor Gulati (Sunil Grover) and Bumper (Kiku Sharda) performed a humorous skit to introduce the cast of Happy Bhag Jayegi on stage and everyone performed on the recently launched dance anthem from the film, ‘Gabru Ready To Mingle Hai’. Kapil and his team had a hilarious conversation with the cast of the movie and engaged with the audiences. The film’s trailer was received with whistles and laughter galore by the media.

Considering the movie title and the humorous incidents revolving around the interesting characters, the makers prefer to call it a run-com instead of a run-of-the-mill romantic comedy. 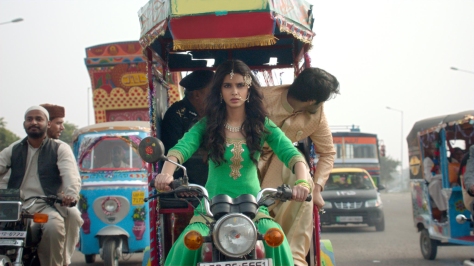 Producer Krishika Lulla of Eros International says, “For the first time, a film’s trailer has been launched at Kapil Sharma’s show, which is one of the most loved and popular sitcoms in Indian television. It’s a game changer, one of a kind of trailer launch that has never been done before in Bollywood What better way to showcase our trailer! I am sure audiences will love the trailer and celebrate the madness that Happy Bhag Jayegi is and connect with unique characters of the film.”

Says producer Aanand L Rai of Colour Yellow Productions, “My films caters to the mass audience showcasing small town romances and stories related to the common man. When Mudassar narrated me the story of Happy Bhag Jayegi, I thought it should be made as it’s a beautiful story.”

Director Mudassar adds, “Aanand sir has been a really good support and he guided me throughout the memorable journey of Happy Bhag Jayegi. I’m very lucky and happy that Krishika Lulla and Aanand sir gave me the opportunity to cast my choice of actors. It’s an interesting bunch of talented actors.”

Directed by Mudassar Aziz and produced by Krishika Lulla and Aanand L Rai, Happy Bhag Jayegi is scheduled to release in UK cinemas on 19th August, 2016

Listen to the first song from the movie here: