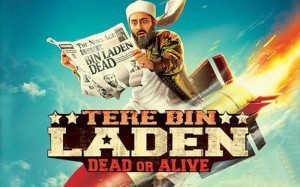 Indian actors Manish Paul, Pradhuman Singh and Piyush Mishra are back with a sequel titled, Tere Bin Laden: Dead or Alive, to the critically acclaimed satirical comedy on the post 9/11 world, Tere Bin Laden (2010). The movie garnered fabulous reviews and went on to become a box office success for its witty content and notable performances.

The makers released the trailer of the second installment, garnering over 2 million views already within its three weeks release.

The trailer explains the story, which revolves around a Bollywood director hired by the CIA on the pretext of making a Hollywood film on Osama’s death. It so happens that a Pakistani group hijacks the idea and things seem to take an uproarious course.

Director Abhishek Sharma has shared that the film will have a common thread with its prequel but the script is original.

Tere Bin Laden: Dead or Alive releases in cinemas worldwide on 26th February 2016 and is distributed by Reliance Entertainment.