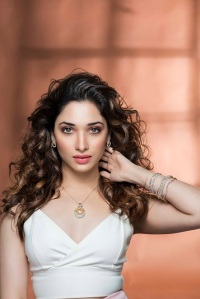 The gorgeous Tamannah Bhatia, who had a great year of 2015 and has many interesting films in her kitty for the year 2016  with the likes of Baahubali 2, Oopiri and big budget south films, has added one more big banner film in her list.

The diva will soon be seen in Prabhu Deva’s next, sharing screen space with the actor choreographer Prabhu Deva and talented actor Sonu Sood. Directed by A.L. Vijay, the film will be produced by Prabhu Deva’s recently launched banner Prabhu Deva Studios.

The untitled movie is known to thriller and this would be Tamannah Bhatia’s first Hindi thriller film. A person close to Tammanah has also informed that beautiful actress is really kicked about sharing screen space with Prabhu Deva. It is known that the makers are going to start shooting for it from the end of February.