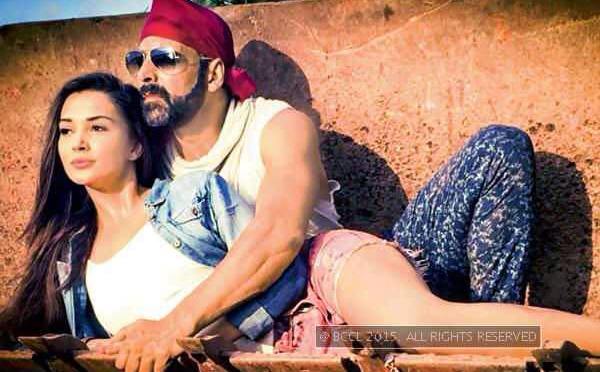 It’s all go for the ever busy Akshay Kumar, as the stylish new look for his forthcoming venture Singh Is Bliing was exclusively unveiled online, sending Twitter into a frenzy as fans ensured the snap trended worldwide.

And fans were not disappointed with the image that greeted them on Twitter – a super slick, chiselled and moody Akshay reclining next to co-star, British actress and model turned Bollywood starlet Amy Jackson. In the classic and effortless pose, Akshay is seen wearing a silky burgundy turban, white vest and blue patterned trousers, whilst the beautiful Amy Jackson is seen in pink shorts, a white top and simple denim jacket.

The fun and games for Akshay didn’t stop with his slick look, as he also wrapped up the second schedule shoot for the film in the exotic climes of Goa. After wrapping up the shoot in Goa, Akshay tweeted to his legion of fans:

Its a wrap 4 d 2nd schedule of #SinghIsBliing!Bidding goodbye 2 Goa & these lovely ladies,thank u 4 ur hospitality 🙂 pic.twitter.com/T3oXaIFOuM

Produced by Akshay Kumar and Ashvini Yardi, under the production banner Grazing Goat Pictures, Singh Is Bliing is billed as an action drama, and stars Akshay Kumar, Amy Jackson and Lara Dutta. Singh is Bliing is set to releases in UK cinemas on 2nd October 2015.