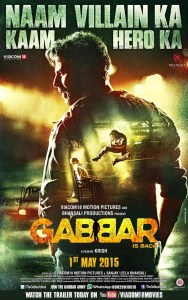 Riding high on the success of Bollywood blockbusters “Gabbar Is Back” and “Baby”, international superstar Akshay Kumar says it feels really great to be appreciated by your audience and fans. ‘I am just so overwhelmed with all the love that people shower on me. I don’t know what to do… how to return their love. The more I try to give back, the more it multiplies. It is just unbelievable. They recently put a huge garland on my film’s poster. I want to say that I love them all’, Akshay told India’s leading national daily Hindustan Times recently.

Akshay has been flooded with calls and messages from not just his fans but also from politicians, who congratulated him for taking up the issue of corruption in his latest project “Gabbar Is Back”.

Akshay firmly believes that because the film was received well by so many fans, the social message in the film has also reached many people. “I do hope we all become anti-corruption at a personal level and instead of harassing a guy who jumps the ­signal, we put those involved in ghotalas of ­billions in the dock. Most of the ­incidents in Gabbar… are based on ­real-life incidents”  … the international icon was quoted as saying to Hindustan Times.

Running strong for the fourth week, Gabbar is Back is a mass entertainer where the actor plays the role of a vigilante. The film carries a strong message against corruption where the actor throws in some power-packed punches. Gabbar is a story of a common man, Ajay (Akshay Kumar) wronged by the establishment, who starts the Anti-Corruption Force (ACF) that aims to track down and cease the corrupt strata of society.

Akshay Kumar is India’s most bankable star and according to many close to Akshay, both professionally and personally, the secret to the actor’s enduring appeal, ongoing and recent box office success and longevity is his winning formula for choosing commercially viable films and his no-nonsense, ultra-professional approach towards his work. Akshay Kumar is one of the few stars in India who has consistently given a break to first-time directors, producers and newcomers.

Gabbar is Back is on general release internationally.