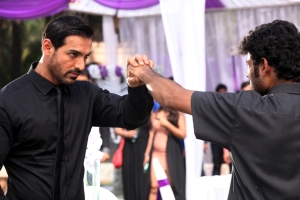 Though Welcome Back is in theory a comic entertainer, shooting for the film turned out to be quite challenging for lead John Abraham who ended up injuring himself quite often.

Having sprained his back while riding a Hummer in the desserts in Dubai, the actor then injured himself while filming a action sequence which involved him breaking glass, a crucial scene in the film just before the interval.

John ended up hurting his hand with several cuts and bruises and a doctor was immediately summoned on the sets to tend to his injury.

Director Anees Bazmee said “I asked him to take a break and then shoot but, John decided to conceal his bruises with make-up and continued shooting for the scene.”

Action Director, Abaas Ali Moghal says he had warned John that its a dangerous act but he insisted to do the act because the scene was so intense. He wanted to look natural because the scene is important to hold back the audience for the 2nd half of the movie.