The film stars the legendary Amitabh Bachchan as never seen before, with south Indian star Dhanush and newcomer Akshara Haasan.

Director R Balki (Cheeni Kum and Paa), created the story as a gift for the veteran actor on his 70th birthday, and has spent the past two years bringing his vision to life. He says of the film: “This films is a homage to a voice that over the past 40 years has become instantly recognisable the world over. The question is… who is the true star, the voice or the actor it belongs to?

Talking to BollyNewsUK in London, Dhanush and Akshara spoke about filming Shamitabh in the English capital, the film and much more…

It is the first time that both of you are promoting a Hindi film in London. How has it been so far?
Dhanush: (Laughs) It is cold.

You filmed scenes for the movie in the capital too…
Dhanush: I love coming to London. It is one of my most favourite cities in the world. It’s the same feeling for me whether I come here for a shoot or vacation. It’s a great city and I really love being here.
Akshara: It was my first shoot abroad. It was really interesting and I loved it. It was an amazing experience, also because it was new for me. It was interesting to see how people were reacting while watching the shooting. We were just going ahead and performing our scenes.

The trailer doesn’t really give away much…
Dhanush: The film is about three different individuals and their qualities. One of them (the character played by Akshara) brings together the other two (Dhanush and Amitabh Bachchan). Every character in the film has something that the other doesn’t have. We how success comes into the frame and then ego enters. The clash of egos, that is what pretty much the film is about.

There were reports that you were offered many movies. Why did you choose Shamitabh as your first film?
Akshara: I didn’t take up the earlier offers because I wasn’t ready to be an actor at that point of time.  I was exploring dance and different opportunities at that time, primarily focusing on dancing. Therefore, I didn’t start acting earlier.  It took me a while to come to this place where I decided to be an actor. I didn’t start acting earlier purely because I wasn’t ready. Shamitabh came to me shortly after I decided to be an actor. I fell in love with the film and the role.

South Indian films are now regularly being remade in Bollywood. Is it a concious decision for you to do something new when you work in Hindi movies e.g.  Raanjhana and now Shamitabh?
Dhanush: I am actually not thinking about such factors. I just want to be a part of a good script. I am not against remakes. It’s not that just the Hindi film industry is remaking Tamil or Telegu films. They also remake Hindi films. We share scripts and movies among us, which is really great.  There is nothing wrong about it. Personally, I am not a big fan of remaking movies because I would like to avoid unnecessary comparisons. It is also always a great feeling when you create something original. If the film is great and the script is good, I don’t mind remakes. I would just prefer an original film.

How do you deal with comparisons since you both have family members in the industry and comparisons are bound to happen?
Akshara: I have been brought up in a way where I have my own identity. I feel that helps me. I feel it would let me take my family legacy forward while creating my own space as Akshara. You can’t avoid comparisons. I deal with it by creating my own identity, working hard and be focused.
Dhanush:  I have never heard anybody compare me with my father-in-law. There is reason to compare a beginner like me with a legend like Rajinikanth.  It’s not fair because he is an icon and I am a huge fan and will always be. Any actor who grew up watching his movies will have mild similarities in the way they act. His attitude, mannerism and modulation are in our system. If at all, there is a silly comparison, I would take it as a huge compliment.

You learnt Hindi for Raanjhana. In Shamitabh, Amitabh Bachchan’s voice is an integral part of the story. Was it more difficult this time around because of that?
Dhanush: I am still trying my level best to learn the language. It was a great experience working with Amitji. He made us feel comfortable. We learnt a lot by just sharing screen space with him. We all know that he has a powerful majestic voice. To perform for his voice was a big challenge and to carry his voice on these tiny shoulders was a big responsibility. I tried my best and also tried stay original. Hopefully I have done a convincing job and hopefully people will like what they see and hear.

Shamitabh is in UK cinemas now. 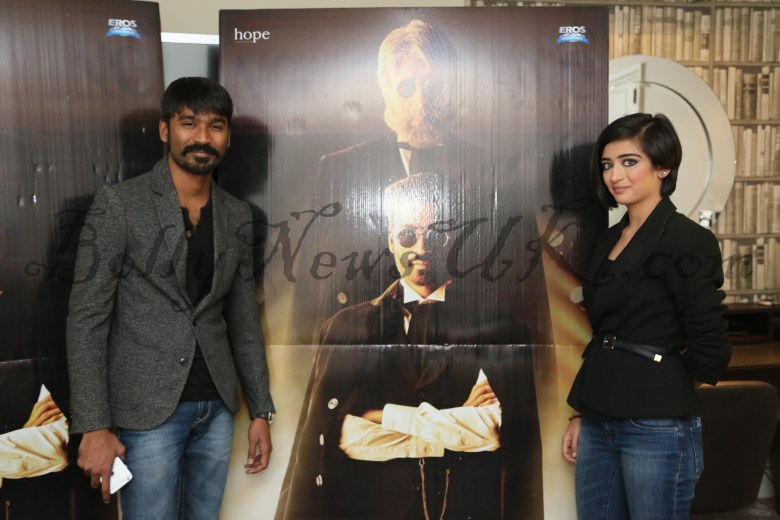