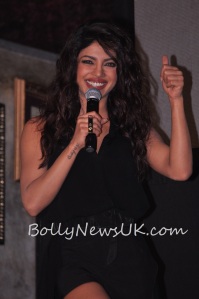 International recording artist and actress Priyanka Chopra will mark her Bollywood singing debut in Zoya Akhtar’s forthcoming film. Until now, Priyanka Chopra was not allowed to sing in her films as she was bound by a contract with an international music label that produced her singles.

However, for Zoya Akhtar’s Dil Dhadakne Do, the actress has lent her voice to one of the songs to go with the end credits. A source says, “Priyanka had recited some lines in Mary Kom which was a lullaby, not a proper song. In her upcoming film, she has sung a song that will be part of end credits. It is a fun composition and she really loved singing it. This is the first time that she has done playback singing for a Bollywood film.”

Before leaving for Los Angeles, the actress is said to have recorded the song in Mumbai. The music of the film has been composed by the Shankar- Ehsaan- Loy triumvirate.

The source adds, “Priyanka did record a song at Bandra studio before she went abroad. It is a solo track and has come out very well. There are also plans to shoot an accompanying video featuring Priyanka and her co-stars.”

Incidentally, back in 2005, Priyanka had declined the offer to sing the song Tinka Tinka for Karam as she wanted to concentrate on her acting career.