Happy New Year is out now in UK cinemas and is released by Yash Raj Films.

Happy New Year was planned right after Main Hoon Na released in 2004. How much has the story and film evolved from the original idea?
Farah Khan: When I planned the film, I did not have a script. It was just an idea and I thought that the script will happen. But it didn’t and took quite some time. I actually wrote another script of Happy New Year and Deepika Padukone was supposed to be in the film. This happened before Om Shanti Om started rolling. It was supposed to star Amitabh Bachchan, Shah Rukh Khan and Zayed Khan. I told Deepika that I will cast you opposite Zayed but if you are really good, then opposite Shah Rukh. Then I again, wrote another script of Happy New Year which had nothing to do with a heist. It just didn’t gel for both, Shah Rukh and me. I then quickly wrote Om Shanti Om in two weeks and luckily I had a heroine waiting (laughs). Poor thing would call me every week and ask “What’s happening? I have been offered a movie, should I take it?”
Deepika Padukone: When you are new to the industry, you don’t know how people function. I had agents and at that time it was a very new thing. Now everyone has an agent to look after their film work. They used to panic and say ‘maybe she has cast someone else’. At that point, it was a huge break for me and I wanted it to happen. Farah kept calling me though and reassured me that whenever the film happens, it will have me in it.
Farah Khan: I made her go to acting classes and she did a Kannada film so that she can be easy in front of the camera. 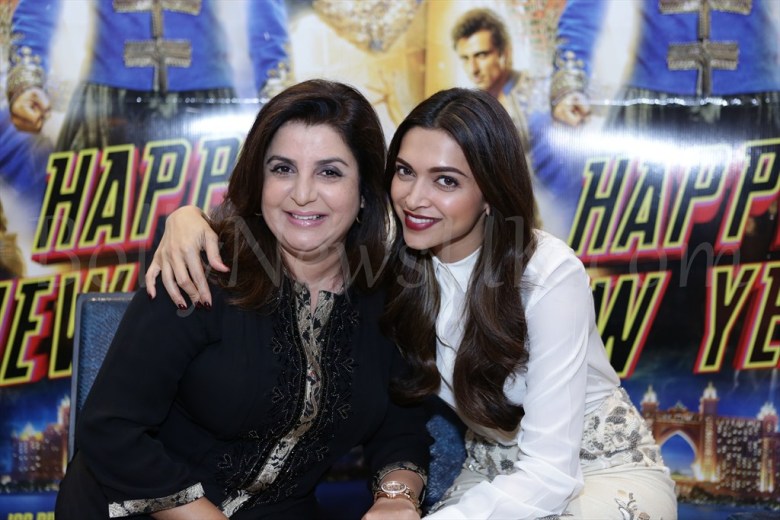 Farah, you announced this film, Happy New Year, after patching up with Shah Rukh…
Farah Khan: Actually, I had exactly two weeks before we patched up finished the script of Happy New Year. I didn’t even know that he will be starring in it because I wasn’t planning on approaching him. I guess it is meant to be.

A new actress was to be launched in the film. What changed your mind?
Farah Khan: Deepika didn’t have dates. She was doing a lot of movies at that time.

Deepika, everyone is fighting for your dates…
Deepika Padukone: Nobody is fighting for me dates. Let me put this straight; she assumed that I was busy. Okay, now I am going to say this. Apparently, everyone was calling her and telling her that they want to do the movie. I never want to step on someone’s toes. She is Maa for me.
Farah Khan: I was worried that if I will ask her and she refuses it, I will die (laughs).
Deepika Padukone: I never go to a director and say ‘I want to do your movie’ and apparently, other people were doing that. Farah was wondering why I wasn’t picking up the phone and expressing my desire to do the film. Basically, we both kept talking about Happy New Year and would ask each other ‘So what’s happening?’
Farah Khan: Then finally one day I put ‘Even Czar is asking, who is the heroine of Happy New Year?’ as my BBM status.
Deepika Padukone: Then Shah Rukh asked me if I want to do the film. I told him ‘I can’t believe you guys took so long’.
Farah Khan: She was actually really busy. She was supposed to start Imtiaz Ali’s film at that time.
Deepika Padukone: I was supposed to start it back then. Happy New Year was also supposed to start around the same time. For whatever reason, Imtiaz Ali’s film got delayed and it all fell into place.

John Abraham was also supposed to star in the film.
Farah Khan: John was approached and was really excited. I guess some people are only excited beforehand.
Deepika Padukone: I guess, when you are making a film and you have just two actors, it is much easier to put it together and with six people it gets complicated. Someone can be confirmed in the beginning but by the time the film stars rolling, things can change.
Farah Khan: People also get a bit nervous as it has an ensemble cast. It is one of the few ensemble movies where everyone has good part to play. I can’t say that Boman’s role is not important.

How did you manage to keep everyone happy give every character importance?
Farah Khan: All my actors were fabulous team players. See, it starts with Shah Rukh. If he decides to be the ‘star’ then it permeates down but he, Abhishek and Deepika were excellent team players. Everyone decided that it’s not a film about one person. It’s not easy to manage six actors. Just getting on the set on time takes a lot.

You are quite temperamental as a director right?
Farah Khan: No!
Deepika Padukone: Even her shouting has so much humour. We are usually laughing when she shouts.
Farah Khan: I would be temperamental if I don’t shout one day and I shout on another but I do it every day (laughs).

Happy New Year is out now in UK cinemas.