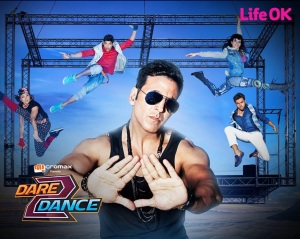 International superstar Akshay Kumar’s new show ‘Dare 2 Dance’ hit the small screen last Saturday and truly set a new benchmark for the concept of dance shows. Indian television has plenty of dance spectacles but nothing quite compares to ‘Dare 2 Dance’, the first ever TV show in the world to combine dance with stunts. Akshay himself pushes the contestants out of their comfort zone. Contestants dance in mid-air, underwater or around fire – something that has never been attempted or seen before on world television.

The show aired to an extremely positive reception from audiences, who clearly appreciated the unique energy Akshay brought to the show. Furthermore, viewers see a guiding hand in the experienced dare-devil, who is always on standby to give the contestants the encouragement they need if they come up against an obstacle.

The contestants participating in the show are all well-known to Indian television and include Sayantani Ghosh, who was the lead star in ‘Naagin’ and appeared in the recent ‘Mahabharat’, as well as Rithvik Dhanjani, who won the last season of ‘Nach Baliye’ with his girlfriend Asha Negi. ‘Dance, India, Dance’ alumni: Prince, Kunwar Amar Singh, Alisha Singh, Sanam Johar and Mayuresh Wadkar also appear on the show, preparing to take their dancing skills to the next level. The show will also showcase the talents of international contestants, including Scarlett Wilson, a British model and dancer who has performed item numbers in various Bollywood films, Emile Callion, a French professional dancer and acrobat and the London-based classical dancer Karan Pangali. This mix of contestants makes for a refreshing and intriguing watch.

If you like dancing, if you like the thrills of doing the unexpected, then ‘Dare 2 Dance’ is the show for you to look forward to on the weekends.