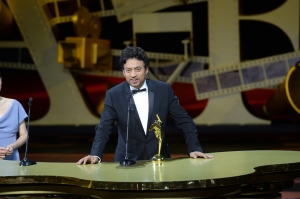 Irrfan is widely known as one of the finest Indian actors of all time, and with little doubt. The actor who has charmed his way into the hearts of the audience and the critics alike with his powerpacked performances in films like Maqbool, Life of Pi, The Namesake, Pan Singh Tomar and more recently The Lunchbox.

Irrfan added yet another feather to his cap a few days ago buy bagging the top honours at the Asian Film Awards, more commonly known as the Oscars of the East.

Commenting on his win the actor said, “This award is considered Asia’s Oscars, which is an honour in itself. Besides, one of my favourite actors, Toni Leung Chiu Wai was also nominated in the same category for the Wong Kar Wai film The Grandmaster, this in fact made the win even more special.”

In addition, The Lunchbox director Ritesh Batra also bagged the honour for the Best Screenplay.

The Lunchbox also stars Nimrit Kaur and Nawazuddin Siddiqui and is produced by DAR Motion Pictures.

The Asian Film Awards were held on the 27th of March 2014 at Macau.