Total Siyapaa was due to release in January 2014. Why was it postponed?
We decided that 7th March is a better release date as it’s really cold in January in London and overseas (laughs). We want audiences to come and watch the film comfortably.

It’s now clashing at the UK Box Office with Gulaab Gang and Queen.
Unfortunately, there is nothing we can do about that.

The film was earlier titled Aman Ki Asha…
That was a working title. We thought that Total Siyapaa suited the nature of the film better. The film is actually a love story and about these two people, Aman and Asha. It ends up being quite chaotic. It also has a backdrop of India and Pakistan as my character is a Pakistani and Yaami Gautam plays an Indian. Total Siyapaa is just a better title, in my opinion.

The trailer is hilarious. What kind of reactions have you received from people and your fans?
I have been getting super feedback. It is amazing that people are laughing out loud multiple times during a trailer of a few seconds. That is a big achievement. There are a lot of funny moments in the film and I am sure audiences will enjoy it.

Tell me about working with Yaami Gautam…
Yaami is a very professional, hardworking and decent girl. It was a delight to work with her. 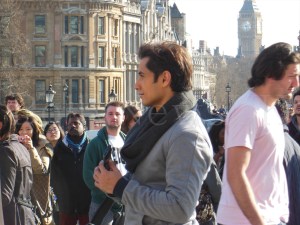 You have filmed London, Paris, New York in the British capital and now Total Siyappa…
We filmed at Trafalgar Square.  That was a lot of fun. We had built a set in London at Wimbledon Studios. All the scenes at Yaami’s house were shot at the studio. We completed principal shooting in 28 days. The fantastic thing about Total Siyapaa is that the story is actually based here. The guy and girl live in London. If you live in London, you will be able to relate to the film a lot. The Indians, Pakistanis and the ones that are in love and live in the UK will really understand this film.

How do you think will it be received in Pakistan as in the film a Muslim boy wants to marry a Hindu girl?
Well, let see how people react to the film. So far, the reactions in Pakistan have been positive. It’s very talked about and people are laughing. It’s all done in good humour. People in Pakistan are really looking forward to it. I am sure that they will be proud of the film once they see it.

The ‘Shahid Afridi’ dialogue created quite a stir in Pakistan…
It’s nothing really. It was done in good humour and I didn’t get any reaction from Shahid. When audiences will see the scene, they will understand the dialogue.

You were a huge sensation in Pakistan as a singer. How does your family feel about you being successful in Bollywood now?
They have become used to the fact that I am now working in Bollywood films. I am away a lot more from home now than I used to be as I am doing a lot of work in Mumbai. For them, I am a family member and it doesn’t matter to them whether I am a Bollywood star or whatever.

How was your experience working with Kirron Kher?
She is absolutely amazing. She has brought a lot into the film. My acting in the film is mostly about reacting to situations. She is the queen of doing comic scenes and it was quite a lot of fun reacting to her wonderful acting.

The film has been produced by Neeraj Pandey, director of A Wednesday and Special Chabbis. Were you surprised that he is making an all-out comedy film?
Neeraj is an extremely good writer. I saw A Wednesday and I really enjoyed it. I thought that he would be wonderful to work with. One day I got a message from him that he’d like to meet up. This project then came about. I don’t see people on the basis of the genre of their work. I think, if someone can write something serious, then he can also write something funny. People don’t have to be restricted to a genre creatively. That’s also how I feel about myself. I don’t want to be just stuck to a particular genre. 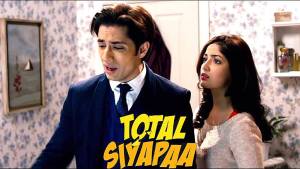 How was your experience composing and singing the songs of Total Siyapaa?
It’s a very good process because usually I work on a private album and not a soundtrack. You have a lot of responsibility and it’s a lot of hard work. It’s very time consuming as well as I was acting at the same time, writing lyrics and composing the music and recording the vocals. It requires a lot of time but if people like the music then it’s all well and good.

You are working on Yash Raj Films’ Kill Dill also starring Govinda, Ranveer Singh and Parineeti Chopra…
It’s a fantastic film and I have been wanting to do a film like that for a long time. It’s very different from how people have seen me so far. I am sure that audiences worldwide will be pleasantly surprised. It has action, drama and everything else. I am having a lot of fun and I am thoroughly enjoying the process. I am very excited.

What’s next after Kill Dil?
I haven’t decided on anything yet. I am writing something of my own and will be producing it as well.