Bollywood actor Ranveer Singh is on a high after a rewarding 2013 with films like Lootera earning him critical appreciation and Goliyoun Ka Rasleela –Ramleela giving him a blockbuster at the box office. The young actor made his debut in Hindi films with YRF’s Band Baaja Barat in 2010 and soon thereafter became the studio’s blue-eyed boy. His third film with the studio, spearheaded by Aditya Chopra, is called Gunday and is set in the 1970s.

In conversation with Bollywood Reporter Sunny Malik, the 28-year-old talks about Gunday, his love for Govinda, the UK success of his last film and much more…

How would you describe the past year for you professionally?
I think it’s been a very good year. It’s just what the doctor ordered after the previous year (2012) where I didn’t have a release at all. I had a break of nineteen months which was a bit of a slump. It’s not the best thing when you don’t have any instalments in your body of work for such a long period, right in the beginning of your career. But I had two films in 2013 that have most certainly done well for me. Lootera received critical appreciation and I think, is the best reviewed film of the year [2013]. Goliyoun Ka Rasleela – Ramleela is a bona fide hit at the box office and also received critical acclaim. I am really happy with the way things have gone last year. I would describe Lootera as a step forward and Goliyoun Ka Rasleela – Ramleela as a giant leap forward in my career. All the nominations that I have received for my work in Goliyoun Ka Rasleela – Ramleela at various award functions have also validated my belief that I had a good past year. I feel good but it’s done and in the past. I am only looking forward to this year and my forthcoming releases Gunday and Kill Dil.

You play a quiet character in Gunday. That is very opposite to how you are in real life…
Well, it’s not as quiet as you would think if you are using the word at the outset. You have to really see the film and you will realise that it’s not Ram-Lakhan or Jai-Veeru. It’s Lakhan-Lakhan or Veeru-Veeru. It’s as if both of the characters are full of life. It’s just that in a conflict or dramatic situation, one of them acts impulsively, that is the character played by Arjun Kapoor. My character is a rather calculating guy. He calculates situations in order to make a smart move. The other guy is loose cannon. He doesn’t think. My character, Vikram, is a mastermind. He has just been blessed with a sharp mind and is a real hustler.

Two trailers of the film have been released. Don’t you think that too much of the film has already been revealed?
No, not really. The most important things for me is that an audience going to see the film should know what they are going to get out of the film in order to avoid disappointment. I have seen a lot of trailers in my life that promised something, yet I came out of the films saying “This is not what I went to see”. Somehow you just feel disappointed and think that you saw something that you weren’t expecting. I think, Gunday has a lot to offer and we are not misleading our audience about what they will see when they come to cinemas. There is no question of too much being given away because the two-and-a-half hours have so much to offer that no one will feel that too much was revealed already.

Your dance steps and expressions in a song from Gunday, Tune Maari Entriyaan, remind me of Govinda…
It’s unintentional but I will admit that I grew up on Govinda, Anil Kapoor and the Khans. I was a 90s baby and I was consuming everything that was popular. Govinda is my foundation for performance. In a song like Tune Maari Entryiaan, what will come out of me will probably be inspired by Govinda. The most surreal thing is that now I am sharing screen space with him. He is someone I looked up to and after watching his films I would say “Someday even I want to be a hero.” He is really my idol and inspiration, in the true sense of the word. The first morning he came on set for Kill Dil, I turned to Shaad Ali (director) and asked him, “Do you realise what is happening?” It was such a dream come true to be directed by Shaad in a film produced by YRF that also stars Govinda. I can’t even describe the feeling of working with him. I have always dreamt of becoming an actor. Whenever I envisioned it, the director would be Shaad and the producer would be Yash Raj Films. That is all in place.

Gunday is primarily about friendship. What is friendship for you?
Friendship for me is a bond. A lot of things go into that bond e.g. trust, dependability, reliability, sharing good and bad times. Your friend has to be your confidante and your pillar of support. I have been blessed to have really close buddies. I’d take a bullet for any of them without batting an eyelid and I’m sure they would do the same for me. I know of people who unfortunately, never had these kinds of relationships. Friends are the special relationships in life that you choose. I know of people who never had that kind of connection with anyone. I know a little bit about what it means to have a friend who you think of as more than just a friend, who is almost like a brother that you never had. 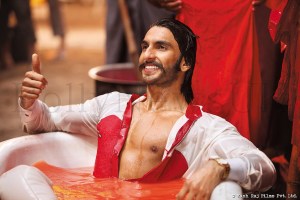 You are really experimenting with your style and outfits off-screen recently…
It’s just that I’m bored. It is out of sheer boredom. I could not be asked to wear one more black suit. It’s either black, grey or dark blue. It’s the same thing over and over again. I got really bored and wanted to wear something different, for my own amusement. I understand that it polarises the fashionistas out there. Some love it, some hate it, some think it’s outstanding and some think it’s ghastly. But that’s okay. I dress for myself. If I feel good about what I’m wearing when I step out, that is all what matters. But yes, sometimes I look back and think, “That suit was really ghastly. I don’t know what I was thinking.” But still, it’s okay because in the moment it seemed fine and it’s something different.

Your last film Goliyoun Ka Rasleela – Ramleela performed better than most releases in the UK last year beating films like Krrish 3, earning almost £1 million at the UK box office. What are your expectations from Gunday now?
Wow, that is some amazing statistics. I do think that it has a lot to do with Deepika’s star value and most of all Sanjay Leela Bhansali’s brand value in the overseas market. But I did benefit from it. A lot of people watched it and I hope people liked my work. I think people have me in their mind and will watch my next film. Gunday is a big film, which I think will be enjoyed by UK audiences. It’s a credible mass entertainer. A mass entertainer has almost become an insult as they are films with no stories, item numbers and a few gags. I am very proud that Gunday is not like that and has a very good story.