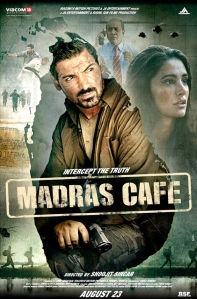 The movie which won tremendous critical acclaim, features John Abraham playing a Government spy who tries to crack the conspiracy of the plot to assassinate the prime minister. Other John Abraham movies available on Eros Now are Shootout at Wadala, Housefull 2 and Desi Boyz for free.

Speaking about the online release John Abraham said, “I’m extremely excited to reach out to our online audience with the film…I look forward to the reactions and hope Madras Cafe does all that its set out to.”

Users can watch movies, music videos and listen to audio tracks for free just by signing up to the service. Eros Now also offers a premium pack for a low monthly subscription of Rs. 249 in India and $7.99 overseas which gives unlimited access to movies in high def, with subtitles.

Eros Now has added 15 minutes preview of Madras Café for viewers which can be viewed here.