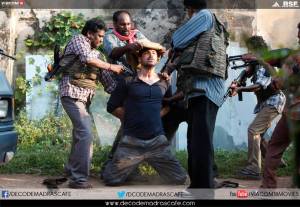 The controversial political thriller film Madras Cafe has caused its first stir amongst the international population with stories emerging that the prominent Sri Lankan Tamil community in Canada are planning to boycott the film because of the sensitive material depicted. Recent reports also say that the film will be banned in the South Indian city of Chennai in Tamil Nadu which has a large Tamil population.

Madras Café is set against the backdrop of the tumultuous and much-publicised Sri Lankan civil war of the 1980s. The subject matter in the film touches upon the inflammatory issues regarding the various factions involved in the drawn-out bloody and brutal conflict, including India’s involvement. The 26 year-long feud finally came to an end in 2009 with the military defeat of the separatist Liberation Tigers of Tamil Eelam (LTTE).