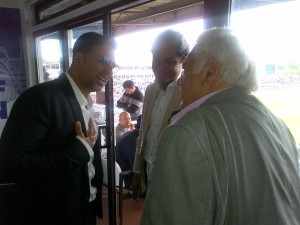 During his recent visit to Birmingham to watch the India-Pakistan match and promote his forthcoming ‘Once Upon A Time In Mumbai Dobaara’, Akshay Kumar came face-to-face with former Farokh Engineer who was extremely happy to meet him.

Farokh Engineer is a former Indian cricketer of Parsi background who played 46 Tests for India and played first-class cricket for Mumbai in India and Lancashire in England. Engineer’s active international career started in 1961 and continued to 1975, and he was India’s first-choice wicket-keeper for most of that period. He was also a highly useful, stylish and very aggressive batsman.

While the rains played spoilsport at Edgbaston, Akshay and Farokh got into a conversation about fitness and Bollywood, which included a discussion on ‘Once Upon A Time In Mumbai Dobaara’, which releases worldwide on August 15.

Says Akshay, “It was great meeting a stalwart cricketer like Farokh Engineer at the match. We had a great conversation about my forthcoming film and the fact that we were in the same school (Don Bosco).”