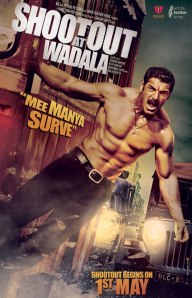 Shootout at Wadala opened across 1900+ screens across the country and recorded the 3rd highest opening in 2013 and highest non-holiday opening of the year.

Despite an “A” certificate and cricket matches, the film successfully secured glowing reviews and a robust opening weekend. Various rights of the multi-starrer have already been sold, contributing additional revenues. These include music, home video and overseas etc.

Shootout at Wadala has been produced by Balaji Motion Pictures and White Feather Films, and directed by Sanjay Gupta.

Starring Anil Kapoor, John Abraham, Tusshar, Manoj Bajpayee, Sonu Sood, Kangana Ranaut, Mahesh Manjrekar, Ronit Roy and a host of others, the film dramatizes the first-ever registered encounter by the Mumbai police, where gangster Manya Surve was shot dead at the junction next to Ambedkar college, Wadalba, Mumbai, back in 1982. It is the next installment in the Shootout series, the first being the 2007 hit, Shootout At Lokhandwala.