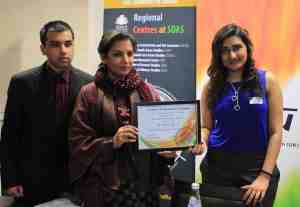 The National Indian Students Union UK (NISU) have awarded Honorary Fellowships to two legends of Indian Cinema marking 100 years of Indian Cinema. Film actress and social activist Mrs Shabana Azmi and poet and scriptwriter Mr Javed Akhtar have been honoured by Indian students in the UK to celebrate and acknowledge their contributions in shaping the present and future of India. The presentation of the Fellowship to Mrs Shabana Azmi was hosted by SOAS, University of London.

Notable actress Mrs Shabana Azmi, who is also known for her social activism and work on women’s rights, is a senior member of the film fraternity and has starred in both mainstream and independent films. Known for her outstanding acting abilities, she has five National Awards under her belt and was recently conferred with the Padma Bhushan.

Mr Javed Akhtar is one of the most celebrated lyricists as well as a screenwriter. He has been much admired for his writing and pivotal contributions to Indian cinema. Apart from being awarded 14 Filmfare Awards and five National Awards, he is the recipient of the Padma Shri and the Padma Bhushan. A member of Citizens for Justice and Peace (CJP), he is actively involved in social affairs of the land.

With NISU marking 2013 as the year that Calls for Change and having promised to work towards a better society free from social evils, the organisation is proud to honour both Mr Akhtar and Mrs Azmi for their immense contribution to both Indian cinema and the society at large for nearly four decades.

Speaking at the event, Mrs Shabana Azmi said, “We are really pleased as this is the first time such a fellowship has been instituted. Recognition from students means a lot as they are a tough group to satisfy, And that it is in honour of our work over the years is really heart-warming. The fact that they are awarding us their very first fellowship makes me very, very pleased and very, very thankful.”

Sanam Arora, President of NISU commented “We are delighted to confer NISU Honorary Fellowships on these two legends of Indian Cinema in the year that marks its centenary. Their contributions to both Cinema and Society are unparalleled and we are humbled to associate NISU with them.”