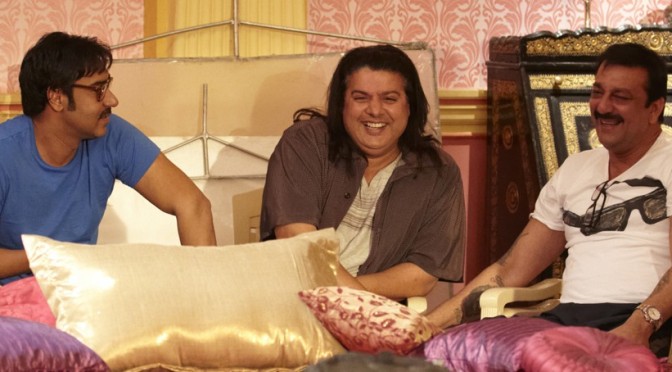 While shooting in Hyderabad, the Himmatwala team received a pleasant and unexpected surprise on the sets recently when none other than actor Sanjay Dutt dropped in to meet his best friend, superstar Ajay Devgn, and the rest of the team.

The actor, who was shooting in the neighborhood, came especially on the sets to watch Devgn dance for the song sequence ‘Taki o Taki Re’ which was being shot at the time.

When asked about his visit Dutt said, “Ajay and I are like brothers and since I was shooting for Policegiri in Ramoji Rao, I took some time off from the shoot especially because I wanted to watch Ajay dance for ‘Taki O Taki (laughing)..”

A source close to the team confirmed Dutt’s presence and said, “Sanjay sir was shooting for his film Policigiri in Hyderabad and when he heard that Ajay sir was shooting for a song sequence ‘Taki O Taki’ he decided to come and visit the sets to watch him dance. In fact he absolutely loved the dance sequence and was in all praise for the chemistry between Ajay sir and Tamannaah on-screen.”

After the shoot was wrapped for the day, the duo was seen having a good time together and sharing a few jokes on dancing. Later, director Sajid Khan, joined them a quick chat. Having the two superstars on the sets provided for a wonderful day for the crew.

Himmatwala will release in UK cinemas on 29th March 2013.