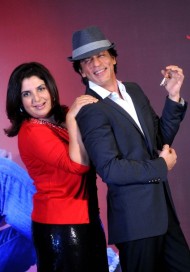 It was a big evening at the music launch of Shirin Farhad Ki Toh Nikal Padi, the cast and crew were ecstatic as they had Shahrukh Khan to join their celebrations.

Cyrus Broacha, was at his funniest best this evening while hosting the event. He gave the audience reasons to laugh at the music launch as well as the third poster launch for Shirin Farhad Ki Toh Nikal Padi. Boman Irani and Farah Khan entered the event, joined the riot of laughter and immediately spread the fever to all present there.

Shahrukh Khan, with his mesmerizing charm joined the celebration, the moment he entered the crowd broke into excitement.

Shahrukh then revealed the third poster which is an imitation of Shahrukh and Kajol in the legendary romantic movie Dilwale Dulhaniya Le Jayenge. The new poster has the duo of Shirin and Farhad dressed in the Raj and Simran avatar.

The three then broke out into a dance, they danced to the song Ramba Mein Samba. The excitement doesn’t end there Shahrukh Khan went on to enacting a scene from Dilwale Dulhaniya Le Jayenge, where Simran became Shirin and the audience was absolutely amused.

They were then joined by Sanjay Leela Bhansali and Bela Sehgal Bhansali to launch the music for the movie. Needless to mention that with Shahrukh Khan’s presence and his support for Farah Khan’s debut film made the event a great success.

Eros International will release the Boman-Farah starrer in UK cinemas on 24th August 2012.