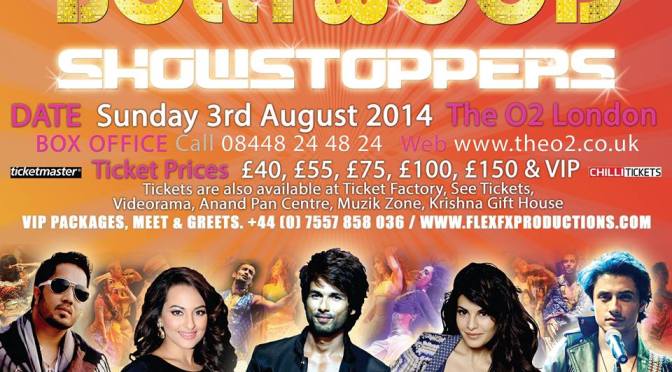 Bollywood Showstoppers 2014 is returning to The O2 on Sunday 3rd August. Headlined by Shahid Kapoor, Sonakshi Sinha, Ali Zafar, Jacqueline Fernandez performing for the first time in the UK and supported by musical sensation Mika Singh and the spectacular Bolly Flex dancers, the four hour spectacular is filled with extravagant entertainment, from jaw-dropping high energy dance performances to live blockbuster musical acts that will keep you on the edge of your feet.

We have teamed up with Bolly-Flex and Naz Choudhury, the director and producer of the Bolly-Flex shows, to give away a pair of tickets. Simply answer the following question using the form below:

This Competition is now closed!

The competition closes on 30thJuly 2014. The winner will be contacted via e-mail. This competition is only open to UK residents.

Bollywood Showstoppers 2013 rocked The O2 with Bipasha Basu, Atif Aslam, Shaan and Malaika Arora and now in 2014, it just got bigger. Don’t miss out on the biggest Bollywood concert of the year, book your tickets now to avoid disappointment. 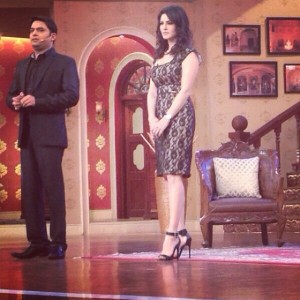 The war between Kapil and Sunny Leone seems to be a thing of the past. There was major talk in December that Kapil had refused to have Sunny on his popular weekend show, which did not go down well with Sunny. But equations have changed now.

Comedy Nights With Kapil has pulled off a major coup by getting Sunny Leone and Ekta Kapoor together on the same platform. The show is known to invite youth icons as guests too, which explains the appearances made by popular cricketers in recent times.

The producers were keen to have an otherwise camera-shy Ekta Kapoor on the show and she consented as it was to promote the keenly awaited Ragini MMS-2, featuring Sunny Leone.