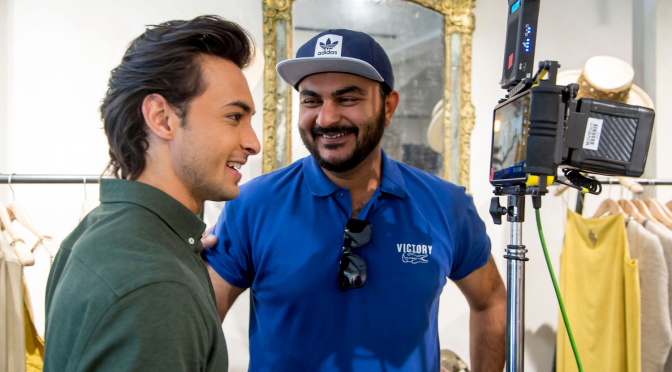 His directorial debut Loveratri is set against the backdrop of Gujarat and the onscreen couple’s love story unfolds over the span of the festival of Navratri.Filmed extensively in the British capital, the film is set to release in UK cinemas on 5th October 2018.

You’ve had press on set in London and are interacting with the UK Media even before the film has wrapped up. That is very unusual for Hindi films…
Yes, that’s true and I’ve worked with plenty of directors and never seen them simultaneously shoot the film and promote it too. It’s something different and new. I’m actually enjoying this process. Normally, we talk about the filming aspect just before the release of the film. Right now, the memories are fresh and I’m able to share the experience as I go along.

You’ve assisted on films like Jab Tak Hai Jaan and FAN, which were filmed in London. Is that why you chose London as a filming location for Loveratri?
More than me choosing the location, the script demanded it. It required us to be in London. When I read the script and London came up, the first thing that came to my mind was filming for Jab Tak Hai Jaan with Yash Chopra in London and then FAN with Shah Rukh Khan. It became a lot more special for me to be filming here.

The most striking difference would’ve been that you were previously assisting on films which starred experienced actors. Did you feel that difference while directing Loveratri?
Not at all actually. I was very happy to start off my directorial debut with a new team and new actors. It has its own set of challenges and brings a certain level of freshness to the process. Everyone who is new, is creating a platform for themselves and all together make a solid base for that. It works for the better of the film.

What sort of challenging situations did you face so far during the making?
I would say working with multiple actors for one scene is always a bit challenging. Having four to five different actors in one scene is a task as you need to bring them all on the same page. But not just the actors, but also the crew behind the camera. That is a challenge but one that we have met with very well. I’ve come to a stage now where everyone who is on my set, knows what is required of them and what I want them to deliver.

Do you feel being an assistant director in the past gives you a better insight into doing that more efficiently?
Definitely. While I was assisting on films, I would often contemplate whether to take a sabbatical and go to film school. I wasn’t sure whether I should or not. For me, Yash Raj Films was my film school. It’s a place extremely close to me and everything I know about movies is from there. From working with different actors, technicians and directors, I believe it was all preparing me for this day.

Till the late 2000’s most Hindi films were in plain Hindi catering to a pan India audience. We then saw movies bring in regional characters and dialects. Your film has a lot of Gujarati elements. Why is that so important now?
The perception audiences had, for example of Delhi or Delhites, was very cliched and that’s what we saw in Hindi films. Then films like Band Baaja Baraat came in and brought out the true characters of what people in Delhi are like. We then saw that with Uttar Pradesh and other places as well. According to me, someone watching a Hindi film in the UK will really enjoy watching a film where characters are portrayed in the right way. Even audiences in Mumbai get intrigued watching characters on screen from other states. They like to see how they talk and interact. It just adds to a complete cinema experience. I think the more real the characters are, the better, as audiences are more likely to connect with them.

Your leading actor Aayush Sharma bonded with you on the sets of Sultan. Did that bond help you directing him more productively?
I first met Aayush on the sets of Sultan where I was the first assistant director and he was assisting me. Salman Khan had brought him on to get him a complete understanding of the movie making experience. We hit it off really well and just bonded. He is like a brother to me. The best thing about directing him is, if I have something on my mind about how a scene needs to be performed, he will understand it right away. Similarly, at times when he is not comfortable, I can just sense it as well. He doesn’t have to say it or show it, but I’ll just know.

How involved were you with the script as the production house Salman Khan Films was already developing the story before you came on board?
At the end of the Sultan schedule, I met with Naren Bhatt, the writer of Loveratri who had the script already. At that time, Salman Khan had spoken to me a few times about directing a film. I told him that I’m meeting this writer who has a script. We then approached Aayush. Simultaneously, Salman Khan Films was attempting to secure a good script to launch Aayush but Salman Khan liked our script and so did Aayush. My mother’s family hails from Ahmedabad which is why I know a lot about Gujarat. I was able to contribute a lot to the script in that aspect.

You then cast Warina Hussain, also a newcomer, for the film. Why not an established face to have a bigger impact?
Once you see the film, you’ll know why we needed a fresh face. Also, we didn’t want audiences to have any preconceived notions about the female actor in the film.

Loveratri is produced by Salman Khan Films and releases in UK cinemas on 5th October 2018.