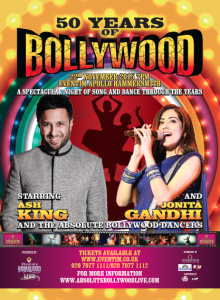 For one night only, celebrate five decades of Bollywood with 88 songs at London’s Apollo Hammersmith this November.

Showcasing the best in Bollywood music and dance over the past five decades, 50 Years of Bollywood is set to take its audiences on an all-singing, all-dancing outing, encapsulating the vivacity and joy of Bollywood – one of the world’s largest and most successful commercial film industries.

Absolute Bollywood Live will indulge audiences with a carnival-esque retrospective of Indian cinema’s greatest musical hits over the past five decades, featuring popular playback singers, Ash King and Jonita Gandhi. The dynamic duo will be singing hits from oldie goldies such as Pyar Hua Ikraar Hua (Shree 420), Roop Tera Mastana (Aradhana), Laila (Qurbani) and Jumma Chumma (Hum) to the most iconic songs of recent times such as Didi Tera Devar (Hum Aapke Hai Kaun), Choli Ke Peeche (Khalnayak), Dola Re (Devdas) and London Thumakda (Queen). Their magical renditions will be brought to life by the thrilling moves of dance troupe Absolute Bollywood Dancers. Written, choreographed and directed by Absolute Bollywood Live, the extravaganza tells the story of ‘Krishna’, who is in search of his ladylove.

Jennie Jethwani, Founder and Managing Director, Absolute Bollywood Live says: “We are delighted to be producing the first ever Absolute Bollywood Live this Diwali. Ash King and Jonita Gandhi are two world-class performers with Bollywood calibre and I am excited that we are creating this truly unique live musical experience with them and my Absolute Bollywood Dancers. The show will take the audience on a colourful and vibrant journey through 50 years of Bollywood song and dance.”

Jonita Gandhi started her journey as a singer winning various competitions, gradually performing alongside celebrated Bollywood singer, Sonu Nigam, as the lead female vocalist across India. Most recently, she is notable for singing the title track of the Shah Rukh Khan starrer Chennai Express.

Come and be enchanted by the splendour of 50 Years of Bollywood this Diwali as some of UK’s creative talent recreate and bring the magic and magnificence of Bollywood to the stage.