Following the runaway success of the prequel, one of Indian cinema’s most loveable romantic comedies for a new generation presents its latest installment when Pyaar Ka Punchnama 2 releases in cinemas on 16th October, a Panorama Studios Production presented by Viacom 18 Motion Pictures, distributed overseas by Reliance Entertainment.

Taking the screen antics a notch higher, Pyaar Ka Punchnama 2 is the much awaited, follow-up outing by director Luv Ranjan – a fresh, youth-oriented comedy depicting the rollercoaster, relationship rides of three, urban-dwelling beaus. Brimming with charm, wit and laughs aplenty, Pyaar Ka Punchnama 2 presents a sassy observation of love lives in the city and depicting the universal woes of relationships with laugh out loud accuracy.

Synopsis: Pyaar Ka Punchnama 2 is the story of Gogo, Thakur and Chauka – three, unsuspecting bachelors who fall for the girls of their dreams, or so they think, until their dreams turn into nightmares. Well settled in their careers and earning a good living respectively, the unsuspecting boys land themselves in their seemingly perfect relationships. However, the honeymoon period soon evaporates as, eventually, the three are tortured in their own unique yet relatable ways. 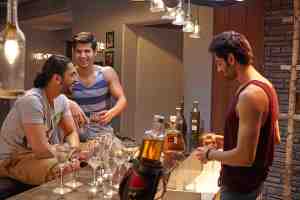 Their experiences include dealing with a girl’s best friends and enduring relationship advice from people with failed relationships themselves. They are made to feel both cheap and indulgent, depending on the girl’s mood, while footing the bill for everything. Their responsibilities now range from becoming an errand boy, a handyman, an on-call IT help, for not just the girl but for everyone in the girl’s family too – being good enough to be trusted with everything, just not the girl.

Notches above Pyaar Ka Punchnama, watch a Man’s ‘better half’ tear him into halves in Pyaar ka Punchnama 2.