The former Miss World, who completes 14 years representing L’Oreal Paris at the Cannes Film Festival, has always stunned us with her red carpet looks. This year, Aishwarya has walked the red carpet from May 17th and May 20th; and will chair the AMfar gala on May 21st.

Before her red carpet appearance, Aishwarya also attended the Variety and UN Women’s panel discussion,during the 68th International Film Festival on Saturday (May 16) on gender equality in a floral Sabyasachi creation along with other panelists including Salma Hayek, Elisabeth Karlsen, Christine Vauchon and Parker Posey.

For her first red carpet appearance at Cannes 2015, Aishwarya opted for a teal Elie Saab gown and was termed the Green Goddess by the media.

The Bollywood beauty, who is the face of the international cosmetic brand, L’Oreal Paris, also showcased the first look of her forthcoming film ‘Jazbaa’.

Bollywood actress Aishwarya Rai Bachchan looked fabulous in a maroon strapless Oscar de la Renta gown that she wore for the unveiling of her comeback movie.

Wearing a white Ralph and Russo creation, Aishwarya was accompanied by the director of the film festival ,Thierry Fremaux, to the premiere of the film ‘Youth’.

The actress will next be filming in London for Karan Johar’s Ae Dil Hai Mushkil also starring Ranbir Kapoor and Anushka Sharma. 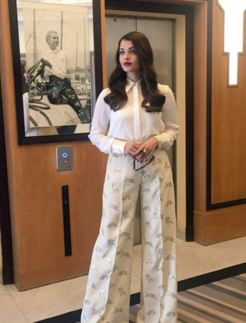 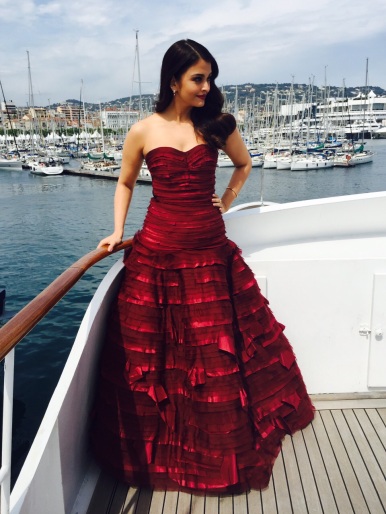