Director Imtiaz Ali (Love Aaj Kal) and Bollywood actress Alia Bhatt (Student Of The Year) flew into London after the world premiere of their new film, Highway, at the International Berlin Film Festival.

How important is the UK success of Highway for you since everyone in India is more focused on the domestic box office?
Imtiaz Ali : I think, there is a democratic aspect in movie exhibition. All people are the same. The more people we can reach, the better it is for us. The UK has been a huge market for Indian films historically. We would like to see Highway do well here. It is quite important to me.

The premiere in Berlin had a huge audience. Don’t you find it dangerous to show it to so many people and journalists one week in advance?
Imtiaz Ali: When you make a movie, it will eventually be seen by people. It needs to come out whenever it does. It’s such a public display that you can’t be secretive about it at all.

Love Aaj Kal earned over £1M back in 2009 and Student Of The Year was a big hit as well. Do you feel the pressure because of certain expectations?
Alia Bhatt: I don’t feel that I am prey to that yet. I don’t feel that people have a lot of expectations. There are expectations of me to deliver in general as people can take any situation to pull you down. The general pressure exists but a good film will always do well. Whether it is in the UK, back home in India or in Berlin. if you connect to the emotions then a film will go beyond that.

Alia stunned everyone when she sang Ishq Wala Love while meeting fans at Cineworld, Feltham for Student Of The Year in 2012. When did you discover her singing talent?
Imtiaz Ali: I discovered her singing abilities during the shoot of Highway. We used to have these impromptu parties during the shoots where Alia would sing. We all were surprised when she sang and that is when I suggested to A.R. Rahman that she should sing a song for the soundtrack. We went into the studio and she sang it. I told her that she took lesser time than what usually singers take while recording songs. It’s a matter of great happiness for me because there is a greater sense of ownership that comes when she sings her own songs and I’d like her to get a sense of ownership over this film.

Were you nervous while recording the song?
Alia Bhatt: I was nervous but I was extremely happy as well. I was so happy that I actually can’t describe it and I don’t think anyone will understand that (laughs). 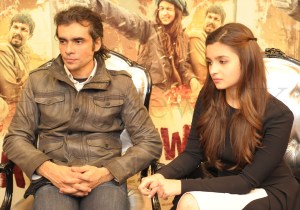 How are you now choosing your films?
Alia Bhatt: I don’t have that sorted out yet. I don’t know what I am looking for or what I need yet. I am just one film old. I went with my gut instinct. I don’t believe in calculating too much. I haven’t figured that out yet.

How did you decide on casting Alia Bhatt after working with stars like Saif Ali Khan, Deepika Padukone and Ranbir Kapoor?
Imtiaz Ali: The only thing that I keep in mind is the character and the actors that are suitable and available to play the part. It doesn’t matter who you have worked with before. It doesn’t matter which films you have done before in my case. When I meet a person and I feel that this is my best and safest option, I go with that.

You have had an association with Eros International and Shree Ashtavanayak in the past. Why did you decide to co-produce this film with Sajid Nadiawala?
Imtiaz Ali: I’d like to be as independent as possible. I want to be a small player that can attach to anybody and make a movie. I feel that different type of collaborations are needed to make a good film. I am working with Sajid Nadiawala on this film and another one. After that, I don’t know yet. The world is open. 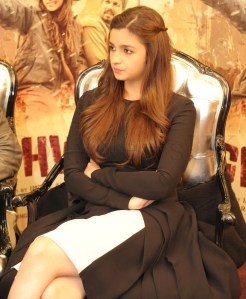 Your first co-stars, Sidharth Malhotra and Varun Dhawan, have taken the easier route and have done a rom-com and comedy film respectively. Did people around you tell you not do a different film like Highway so early in your career?
Alia Bhatt: I didn’t actually discuss it with anyone.

Not even you father, Mahesh Bhatt?
Alia Bhatt: He actually told me that I must to do this film when he met Imtiaz (laughs). There was no discussion there. Once the trailer was out, I did get a lot of feedback that it’s a risk and that I should have waited before doing such a film. At the same time, people were surprised and that is always nice. People like surprises. Let’s see how it goes. I didn’t calculate and didn’t think. I just feel it’s a good journey for me.

Karan Johar loves to pamper his stars. How different was it working with Imtiaz compared to him?
Alia Bhatt: The difference was that we were shooting different films. I am a very likable person so people treat me nicely (laughs).

You have shot films in Europe like Rockstar and Love Aaj Kal. Why did you decide to shoot this films completely in India?
Imtiaz Ali: The story demanded it to be shot in India. You just go with the location that goes with the story.

What is next for you after Highway?
Alia Bhatt: My film produced by Karan Johar and Sajid Nadiawala, Two States, with Arjun Kapoor releases on 18th April and I think, I am going to be back in London to promote the film, hopefully.
Imtiaz Ali: There is a story I am working on. I will probably start shooting for it in July.

The film stars Deepika and Ranbir Kapoor right?
Imtiaz Ali: Ranbir is in the film. I have to yet confirm everything else.