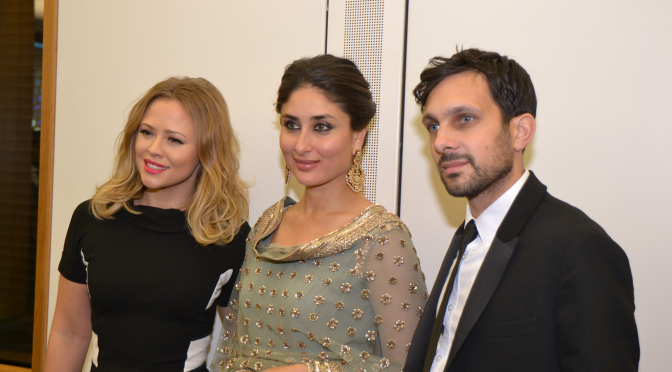 International celebrities were honoured by Asian Sunday newspaper and Members of Parliament for their respective contributions to the global entertainment industry.

Kareena Kapoor Khan, a fourth-generation actress who is the reigning heartthrob of today’s generation and one of the rare actresses who has won critical as well as popular acclaim, was honoured by Rt Hon Keith Vaz MP; while Bradford-born Kimberley Walsh, singer-songwriter, model, television presenter, actress and band member of Girls Aloud; and Dynamo, AKA Steven Frayne, Dynamo: Magician Impossible were honoured by Rt Hon David Ward MP for Bradford East and members of Bradford Metropolitan District Council.

Speaking at the event, Kareena Kapoor Khan said, “United Kingdom really feels like a home away from home. It’s one of my favourite destinations to film a movie… everyone is so helpful and so kind. I am so happy I have made it here and thanks to everyone who has been a part of it.”

Kimberley Walsh said, “I am from Bradford and was brought up in Bradford. It is a multicultural and diverse city and has really shaped me as a person. It has made me incredibly grounded in this industry that I have chosen to be in. I have always been very proud coming from Bradford and this is a huge honour for me.”

Dynamo said, “Many people when I was younger, when I told them I wanted to be a magician, they told me to get a proper job. But thanks to all the support I got in Bradford, I made it. It’s where I started doing all my tricks. I was in the school playground doing magic but then later on I developed my skills and decided to take it to Bradford Town Centre… performing magic there to get tips for my mum, for food. With this support, I was able to take magic all over the world, even to India now. “