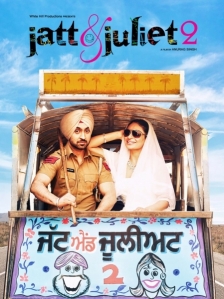 After the unprecedented, smash hit success of Jatt & Juliet, which broke all previous Box Office records in India and overseas for a Punjabi film, the industry’s most adored screen-couple, Diljit Dosanjh and Neeru Bajwa, reunite to create movie magic as they go head to head once again, this time on the unsuspecting shores of Canada. Supporting them on screen is a motley crew of loveable misfits and mad characters played by Rana Jung Bahadaur, Jaswinder Bhalla, Amrit Bhilla, Devinder Dillon, Julia Fox, Brad Harder, Jacob Insley and Hitesh Jogia.

A family entertainer and the must-see, feelgood film this summer, Jatt & Juliet 2 will take audiences on a laugh-out-loud journey filled with punchy one-liners, quick-witted comebacks and comic gold moments. The family entertainer bears all the hallmarks of another comedy classic and Box Office chart-topper.

Synopsis:
Jatt is a happy-go-lucky chap, equally mischievous and adorable, while Juliet is a no-mess, no-nonsense, modern day Punjabi lass. Sparks fly when their paths cross once more en route to Canada, as these two polar opposites clash due to their conflicting outlooks on life. But as Fate continues to bring them together, their enmity slowly but surely morphs into friendship, only for them to realise its true meaning when they get separated. Will life grant them one more chance to prove their love for each other, or will their egos continue to keep them locked at loggerheads?

Prepare to fall in love with the Punjabi romantic comedy of 2013, as Jatt & Juliet 2 arrives in cinemas on 28th June, presented by Tip Top Entertainment.