A comedy. A horror-thriller. An action-adventure. Go Goa Gone is all of these rolled into one! A unique combination of fear and funny makes this film a one-of-a-kind genre bender – A Zombie Comedy, or zomcom!

This might sound like a paradox, but Illuminati Films and Eros International have decided to push the envelope for Indian cinema with their next film – Go Goa Gone. The zombie comedy, directed by Raj Nidimoru and Krishna DK, is all set to release in UK cinemas on 10th May  2013. The film stars actors Saif Ali Khan, Kunal Khemu, Vir Das, Anand Tiwary and Puja Gupta.

Hardik (Kunal Khemu) and Luv (Vir Das) are two dope heads who tag along to Goa with their best buddy, Bunny (Anand Tiwary), on his business trip. Luv comes across a free-spirited girl, Luna (Puja Gupta) who casually invites them to an exclusive underground rave party on a remote island! The party is the brainchild of the macho Russian Mafioso, Boris (Saif Ali Khan), to launch the ultimate party drug.

But something is not right on this island! All of a sudden, they are accosted by zombies! Where did these zombies come from? And who is Boris really? And why has this cold-hearted drug-dealing don come to save their lives? Together they need to get the hell out of the infected island! But do they? 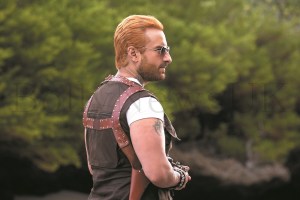 Go Goa Gone is an unusual mixture of hilarious comedy, camaraderie, slick action and zombies. Raj says, “A zombie film in Hindi was unheard of until then.” DK adds, “But we were sure that this is the film we would like to make after Shor In The City.”

Saif, who has acted and produced the film, play Boris who is a Russian Mafia Lord. “I loved Boris from the first time I discovered him. He is tough and cool, but also very funny. He has a good heart and is brave. The dynamics between him and the boys is hysterical. I was very excited to play Boris the zombie hunter and even happier to produce this film,” says Saif.

Dinesh Vijan, Producer, Illuminati Films explains, “There hasn’t been a character like Boris or a concept like this on Indian screens. This is exactly what got us excited to make this film. The zombies will keep you on the edge of your seat and the humour will make you fall of it – making it a zombie comedy… a ZOM-COM! Hopefully it’ll be a genre defining film for us.”

“We have always liked being associated with cinema that’s a keeper. Go Goa Gone will be that one film you will find hard to forget and would want to go back and watch. It is always about taking the next step in the movie business and we are glad we are a part of this project,” says Sunil Lulla, Producer, Eros International Media Ltd.

After successfully making romantic comedies, the makers are ready to introduce a new genre of zom-com.