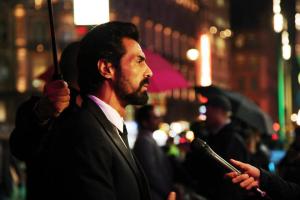 The actor spoke to Sunny Malik  for BollyNewsUK about the film, which had its world premiere at the London Film Festival earlier this month.

You have had a lot of Premieres in London for your films. Why is the UK so special for you?
The UK is a huge market for Bollywood films. Whenever I have come to London, I have had a very warm reception and fans have been extremely affectionate. I know the UK audience always looks forward for something new and different. Even Rajneeti was very well received here. You can’t ignore the UK market. It’s too big to ignore.

Your Heroine co-star Kareena recently told us that UK audiences mainly like family films and loves stories. What’s your point of view?
That is true. But Chakravyuh is a film that you can watch with your family as well. It’s entertaining, emotional and about friendship. It is about an issue every Indian should be aware about. It’s a drama which is entertaining and wholesome. It’s a very commercial film but not a love story, even though it has certain love angles within the story. But I think, the audience is also changing and they want to see films which are different and new. They want to see films for which you bring your whole anatomy intact and not leave your brains at home.

Tell us something about your character in the film.

My character’s name is Adil Khan. He is someone who always wanted to join the police force. He is extremely upright and then is put into a situation where he has to deal with a conflict between his closest friend and himself. He also has to deal between the conflict of his duty and the system, a conflict between his wife, who is also a police officer, and his duty. It’s a very layered character and extremely sensitive. He believes that if the system is not working, one has to repair it, not destroy it. He believes that the system has not done right but also believes that the way Naxalites have chosen, is not the correct path. That is Adil Khan.

The action in the film is quite realistic. Tell me a little about it.
Yes, it is. We had to keep it realistic. There is no cable work, people hitting each other and people spinning hundreds of times before falling down. It is exactly how it happens in real life and very sudden. That keeps the film very real and edgy.

How was your experience working with Prakash Jha?
I always wanted to play a cop and I always said that I will only play one in a Prakash Jha film. He really makes his actors go the distance and gives them the material to do so. That is very rare. He is very passionate about films and even though they are about sensitive topics, he makes them entertaining. I learnt a lot from working with him. He never directs you, he only creates the setting and you just know what to do. It really is a pleasure working with him.

Dialogues in Prakash Jha films are usually hard to understand without subtitles for NRI audiences. Is it going to be different for Chakravyuh?
If people don’t understand them, I am sure they can read the subtitles. It’s not very hard to read them (laughs). However, I think if you are coming to watch a Hindi film you should be familiar with the language. Sometimes, when I watch an English film, even I don’t understand certain words but it teaches you and you learn from it. The flavour of the language in this film is from the region it is set in, which is pure Hindi. They speak very well but what is important that they create the flavour and the mood of the film. If the characters start speaking anglicized Hindi, I don’t think the NRI audience will like that very much (laughs).

What other films are you currently working on?

I have just completed a film with Sudhir Mishra called Inkaar with Chitrangada Singh which will be out in January. I am shooting with Nikhil Advani for an action film. I think it is the first time Nikhil Advani (Kal Ho Naa Ho) is making an action film. I am quite excited about that because Tom Struthers is  doing the action and has co-coordinated the action sequences in The Dark Knight, Inception and Blood Diamond etc. I am training with him and it is really going to be something special. I have another film which I will shoot after Nikhil’s film called Villain and then I will go back to my favourite director, Prakash Jha for Satyagraha (also starring Ajay Devgn and Kareena Kapoor).

You produced a film called I See You which was filmed in London many years ago. When are you going to produce a film again?
I have a lot of scripts ready for production. Producing a film is definitely going to be another extension of myself. I am being selfish as an actor right now and doing the kind of roles that I want to do. Hopefully, by mid next year I will take a backseat and produce a film because I know that it is required.

Chakravyuh, produced by Prakash Jha Productions and Eros International, is out now on genereal release in UK cinemas.