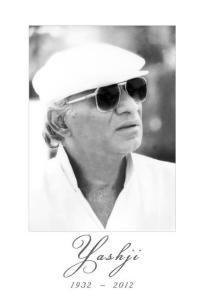 Veteran Indian filmmaker Yash Chopra passed away on Sunday, weeks before the release of Jab Tak Hai Jaan, which he had announced would be his last directorial venture. The romantic saga is coming out Nov 13, but unfortunately he will not be around to see it.

Chopra, who turned 80, on 27th September, was born in Lahore in 1932 and eventually came to Mumbai after the partition.

Yash Chopra was known as the ‘King of Romance’ to audiences worldwide, a well-deserved title after he created memorable love stories in Daag, Kabhi Kabhie, Silsila, Chandni, Dil To Pagal Hai, and Veer Zaara.

The late filmmaker was also one of the first directors to showcase London and the UK in his films and productions. His forthcoming release, Jab Tak Hai Jaan, is also set in London which Chopra directed himself in and around the British capital earlier this year.

“An association of 44 years abruptly comes to an end. He went away too soon and too suddenly. He deserved to be with us longer. Yash Chopra, a friend first, a creative legend later, has passed away this (Sunday) evening in the late hours,” Amitabh Bachchan wrote on his blog srbachchan.tumblr.com.

Our heartfelt condolences go to Yashji’s family and close friends.