The team behind Eros International’s Teri Meri Kahaani were in London recently for the UK Premiere of the film. Shahid Kapoor, Priyanka Chopra, director and producer Kunal Kohli and producer Vicky Bahri attended a press conference at a central London venue, the UK Premiere at Cineworld, Feltham and the after party at Chak89.

Speaking at his first ever London Press Conference 31-year-old actor Shahid Kapoor said: “It’s wonderful to be here in London despite the bad weather. We are used to that now. London is one of my favourite cities. This is the first time that one of my films is premiering in London so I am very excited.”

“Teri Meri Kahaani is a fun, easy, light, entertaining romantic comedy. What is very different about the film is that it is based in three different eras. It is a two hours film so in forty minutes we have to tell a story of each era. We have 1960, 2012 and 1910. They were very different characters for me and Priyanka to play, almost like a triple role. It is a fun film which can be watched with the entire family. We are really excited about this and to know what the overseas audience thinks about it. It is a very overseas friendly audience film,” said Kapoor who has worked with Priyanka Chopra in Vishal Bharadwaj’s Kaminey a few years ago.

Priyanka Chopra who is making her international music debut this year and also attended a press conference in London earlier this year to promote the film has interacted with the UK press on various occasions. The Dostana actress recalled at the event that her film Love Story 2050 also premiered at the same venue: “I have premiered a film here before and it was absolutely wonderful. England has always given us so much love and affection and so much support for all our films. That is what we hope for Teri Meri Kahaani. In India and Hindi movies we love love. This is love mixed with entertainment.”

“The 2012 section is based right here in England. We shot in Nottingham and Stratford-upon-Avon and that was really fun. It’s contemporary and today. It is how people stay in touch over technology, like Skype, phones, SMSes and you feel like being part of each other’s life without being next to each other,” added Priyanka. 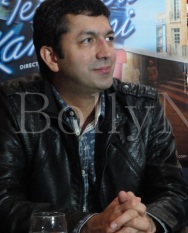 Speaking to the press, former film critic and the man behind films like Hum Tum and Fanaa, Kunal Kohli said that his leading actors share great chemistry in his latest film, “Their chemistry is amazing. Every time a love story is made and is successful, the lead pair is very crucial. Shahid and PeeCee had eight scenes in Kaminey and were absolutely sizzling and electrifying. In this film they have sixty-eight scenes. That was a pretty obvious reason to choose them. They share an amazing on-screen chemistry.”

Teri Meri Kahaani is out now.