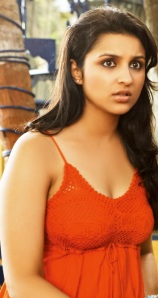 Yash Raj Films’ movie for 2011 ‘Ladies Vs Ricky Bahl’ has not only created the magic of bringing Ranveer Singh and Anushka Sharma back together but has also introduced a new face on the big screen – none other than the gorgeous Parineeti Chopra.

Parineeti Chopra, who is also Priyanka Chopra’s cousin, has created quite a stir in Ladies Vs Ricky Bahl with her role as Dimple Chaddha – a rich and spoilt Delhi-ite. Parineeti has done full justice to her role with her impeccable comic timing and brash dialogue delivery. Parineeti is ensured the continuation of the Chopra tradition of excellence.

Parineeti was working at Yash Raj Films as a PR consultant before she was discovered by none other than the director of Ladies Vs Ricky Bahl – Maneesh Sharma. Following an audition, she was selected for the role of Dimple and the results, of course, are for all to see.

Parineeti has wooed the audience and the critics alike with her brilliant performance. Needless to say, Yash Raj Films is doing everything in its power to cultivate her talent. Her next film Ishaqzaade will debut her in a leading role.

Is Parineeti a one movie wonder or will she continue to enthrall the audience? That remains to be seen!