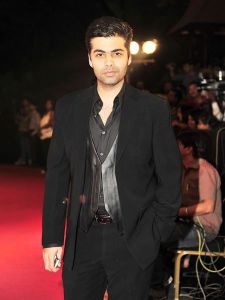 It has been 13 years since Kuch Kuch Hota Hai premiered for the first time on the silver screen. This movie was Karan Johars debut as a director and just like any other first timer; even Karan went cold feet before and during the movies release.

Karan tweeted saying, Kuch Kuch Hota Hai released on 16th October, 1998… 13 years ago… I still remember all 120 kg of myself standing nervously at the premier!!

It is difficult to believe now that a person like Karan Johar who has such an inspiring personality, can get cold feet and could weigh a whopping 120 kilos. But as wise men say, that confidence and personality comes with experience, and no one can explain it better than Karan Johar himself.

‘Kuch Kuch Hota Hai’ became the biggest hit of the year in India and overseas then it went on to even win the National award. This movie gave a standard dialogue to all the lovers and friends in the world that, Pyaar Dosti Hai.

This film also reunited Shah Rukh Khan and Kajol post ‘Dilwale Dulhania Le Jayenge’ and went on to become the biggest film Rani Mukherjee acted in, in the beginning of her career as an actress.
Karan Johar has since directed blockbusters like Kabhi Khushi Kabhi Gham, Kabhi Alvida Naa Kehna and My Name Is Khan.

The 39-year-old director is currently busy with his upcoming project “Student of the Year”, which will mark the debut of Varun Dhawan, Siddharth Malhotra and Alia Bhatt.