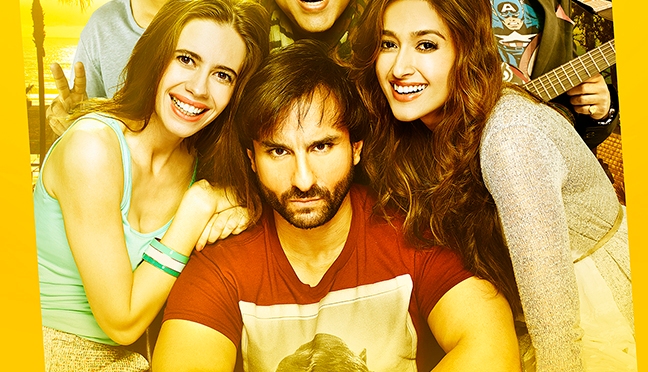 Synopsis: A Hard core Commitment Phobic , running away from all the I Love You’s best describes Yudi. He may not have a problem with the phrase but the after effects of it are too much for him to handle. An author in his late 30’s, he’s suave, sophisticated and is enjoying his life whilst avoiding any kind of sticky love situations. His claim to fame being a single book written by him years ago which was an instant hit . He hasn’t managed to pen anything in many years since then as he doesn’t have to . He’s got everything that he always wanted – Fame, Money & Girls! Why exert yourself when you have everything you need ?

Especially not like his friend Montu , who fell in love with one woman & married her and then became an Oops father . Why tie yourself down to one woman when you have the buffet at your disposal!

Yudi thanks his lucky stars every time he thinks otherwise.

Sounds like a Happy Ending to us…. But don’t get carried away, it’s just the beginning! Yudis happy life is about to encounter a speed breaker as he’s out of both money & luck.

To make matters worse his ex-girlfriend  who thinks she still is his girlfriend  has him on a tight leash while he’s also trying to compete with Aanchal, A famous and talented love story writer. His only salvation comes in the form of his agent who gets him a gig to write a script for an upcoming  Bollywood comedy. And the hero in this film? Action star extraordinaire Armaan who is looking to  reinvent himself as a lover boy & has enough help from every famous  cosmetic surgeon in the world.

Eros International will release the film in UK cinemas on 21 November 2014.